With widespread use will also come a potentially powerful dataset that could help guide the development and refinement of our care management systems.

“When you have a million people that, every day, you see…whether they urinated more or less, whether they got out of bed very late or not so late, whether they left the front door open again for longer than half an hour, whether they open up the fridge at all – you take all that, de-identify it, and then do the analytics…you get a lots of valuable data.” 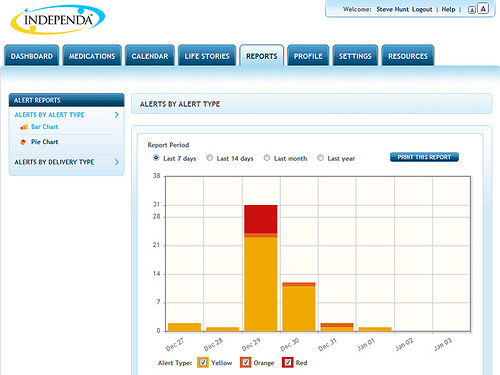 Its not hard to imagine how a refrigerator that is not opened in more than 24 hours or an individual in bed for more than 12 hours may be warning flags around which interventions could be developed. And with a rich, diverse dataset, its likely that we’ll find many less intuitive yet powerful predictors that can help us treat, say, a UTI with an oral antibiotic rather than with an ICU admission for sepsis management. Unlike traditional home care companies, Independa is not providing covered services however – these are intentionally out-of-pocket expenditures.

“…we don’t have FDA approval by design. We don’t diagnose, we don’t share real time data for a provider to diagnose. And that’s been a conscious decision because we do respect that’s where the problems are in our healthcare system. So we want to be a global company and to do that we really have to go after true market economics, which really have to do right now with people paying out of their pocket.”

Mr. Saneii additionally points out that a fee-for-service system incentivizes physicians, hospitals, and other stakeholders to provide more and higher cost services; his intent is to keep Independa operating outside of that system. On the other hand, its worth noting many of the elderly individuals that Independa aims to keep in their homes and out of care facilities and hospitals will also lack the financial means to pay for these services out of pocket. On a regional and national scale, this may ultimately limit the impact that Independa can have. Nonetheless, Independa certainly takes a unique approach to a major challenge. With our shifting demographics, these kinds of new ideas are definitely in need. As Mr. Saneii put it, “…how do you keep people where they want to be longer, safer, and more comfortably…we as a society, as a technology group can do better than I’ve fallen and I can’t get up.”