[This is a preview of some of the exciting mHealth research being presented at the upcoming Medicine 2.0 Congress in September. This abstract and others are candidates for the iMedicalApps-Medicine 2.0 mHealth Research Award]

Vaccines are one of the most cost-effective interventions for improving childhood survival.

However, despite the life saving potential of vaccines, many lower income countries still have low vaccine coverage (percentage of the population that is vaccinated) and/or delays in people receiving vaccines.

According to the World Health Organization, if vaccine coverage levels increased from 2009 levels of 82% to 90%, it is estimated that an additional 2 million lives would be saved per year.

The Problem of Vaccine Delays

Through support of GAVI Alliance, Bill and Melinda Gates Foundation, and UNICEF, resources have been allocated to supply-side deficiencies such as increasing vaccine supply, lowering vaccine prices, and improving cold-chain capacity. Although vaccine coverage has improved over the past decade, immunization gaps persist.

Novel interventions aimed at addressing demand-side deficiencies, such as travel cost, vaccine fears and perception, and realization of vaccine benefits, may prove fruitful to ensure that the hard-to-reach populations are no longer hard-to-reach.

Conditional cash transfers (CCTs) and reminder messages are two demand-side interventions that have shown positive gains in various forms of health care utilization. They can be employed for increasing vaccine coverage. CCTS are the transfer of money or other remuneration for completion of a positive behavior. Although well documented in Latin America, little evidence has been generated on the effect of CCTs in African countries, particularly for immunization.

In parts of the world where landline ownership and postal mail are rare, reminder messages can be delivered through short message system (SMS), more familiarly known as text messaging.

Despite Kenya’s low income and poor health indicators, the ownership and use of mobile phones is common among even the poorest individuals in the country. September 2011 estimates show over 26 million cellular subscriptions; equating to a 20.4% increase from the previous year and resulting in 67% of the adult population as mobile phone subscribers. With increasing mobile phone use, financial services are rapidly being integrated into mobile phones, known as mobile-money (mMoney). 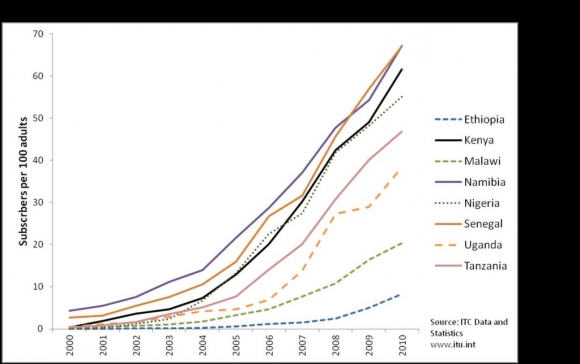 Realizing the potential of SMS reminders and CCTs to shape behavior change, acknowledging immunizations gaps persist in lower income countries, and taking advantage of the high penetration of mobile phones and mMoney, our group completed a pilot study in Siaya District, Nyanza province, Kenya, that tested the feasibility of a mobile phone-based system to deliver CCTs and reminder messages to improve pentavalent (diphtheria, tetanus toxoid, pertussis, hepatitis B, andHib) vaccine coverage and timeliness.

Briefly, we enrolled 72 mothers of infants aged 0 to 3 weeks who either owned a cell phone or had immediate access to one. RapidSMS, a free and open-source system, was programmed to send SMS messages to enrolled mother-infant pairs three days prior to, and on the scheduled date of first and second doses of pentavalent vaccine, to remind mothers to bring their infant to the immunization clinic.

If mothers brought their infant for vaccination within 4 weeks of SMS message, 150 Kenyan Schillings (about $2.00 USD) were transferred to the mother’s mobile phone in either mMoney or air-time credit. We found that such a system is technically feasible and welcomed by the community.

Stemming from the success of this pilot study, colleagues at the International Vaccine Access Center (IVAC) at Johns Hopkins Bloomberg School of Public Health and from the Center for Disease Control and Prevention/ Kenya Medical Research Institute (CDC/KEMRI) in collaboration are developing a proposal for a village-randomized control trial to test the efficacy of SMS messages alone or SMS + CCT as compared to no intervention, in improving coverage and timeliness of vaccination in rural western Kenya.

Globally, no other trial has examined the combination of SMS messages and CCTs and its effect on any form of health care utilization. Within all developing countries, this will be the first trial to explore the effect of SMS reminders on immunizations.

Within the next several years, if not already, many other countries will share a similar technology profile to Kenya. The era of mobile phones is now, and rigorous scientific evidence is needed for these emerging technologies as vehicles to improve vaccination coverage and timeliness.