Zipnosis is an online virtual care service that provides rapid diagnosis and treatment to patients.

The service focuses on conditions proposed to have a good body of medical evidence of being treatable without a face-to-face interaction including:

The prospective patient begins by registering and then entering their symptoms into Zipnosis’ diagnostic interview on a HIPAA secure platform. The patient is asked a series of questions, which adapt based on the symptoms that are entered.

The information is then submitted to a board certified physician for review. The physician verifies the diagnosis and advises treatment. If a prescription medication is warranted, it will be submitted to a pharmacy selected by the patient and the patient will receive notification by email or text message.

The entire price for this service? Only $25, the typical price of the average patient co-pay.

The cost of the medication, if prescribed, is not included. If the physician determines that the patient needs to be seen face-to-face for further workup, that recommendation is made to the patient and the $25 is refunded. The patient is then advised to seek care at one of the medical providers that Zipnosis has partnered with, or at a nearby physicians office, urgent care center or ER, depending on the severity and acuity of the symptoms. In addition to Minnesota, Zipnosis has now expanded the service to include Colorado and Washington State. 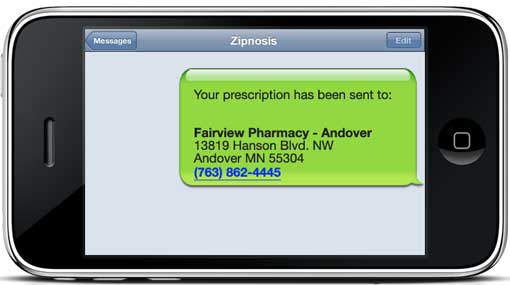 The service was launched in 2010 in Minnesota, by current CEO Jon Pearce, and 2 additional co-founders. In an interview with iMedicalApps, Pearce says the number of users has been “in the thousands” and that growth has tripled this year over last, primarily because of the new states that have been added, but also because of additional growth in Minnesota.

Asynchronous care, the type provided by Zipnosis, is felt to result in higher patient satisfaction and potential cost savings, because of a decrease in travel expenses and lost time from work and the typically lower payments required by the provider. Zipnosis’ target population is younger, healthier patients, without multiple medical comorbidities – otherwise active individuals, who may be too busy to make a trip to the doctors office, which can be especially difficult if your doctor doesn’t offer evening or weekend hours or if you can’t get an immediate appointment. It can also be very useful for people who live in remote areas that aren’t well served by physicians.

The revenue model? Zipnosis splits the $25 fee it collects with its medical provider partners. Theoretically, if one particular large medical group is responsible for an entire state, the volume and resulting revenue generated can be fairly substantial. It also offers a SAAS model, where it licenses its technology to organizations for a fee. Zipnosis is currently angel funded. It plans to continue its growth nationwide, while examining each state’s statement on telemedicine and addressing any restrictions on prescribing rights. 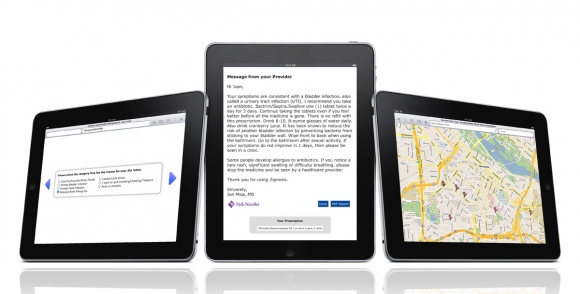 There are, of course, certain inherent risks to diagnosing and treating someone without seeing them in person. One could argue that to truly diagnose a bacterial throat infection or urinary tract infection, a culture should be obtained prior to initiating treatment with antibiotics. However there may be, oftentimes, clear indicators in the history which would suggest either of these diagnoses and if Zipnosis’ diagnostic software or the physician feels a culture or additional workup is needed, they can advise the patient as such.

Admittedly, as a physician, if I have symptoms that are pretty clearly indicative of strep throat, I’m more likely to ask my colleague for a script than I am to take time out and go make an appointment and have a throat culture obtained. I haven’t tried Zipnosis’ diagnostic software, but if it’s accurate, it then extends this same service to its population of patients. Indeed, it does so at a very compelling price point.