The system monitors heart and respiration rates, as well as movement, without pressure pads, sensors or cuffs that touch the patient.

The system also establishes a constant biofeedback loop between the point of care and the nurse’s stations, tablets, pagers, or doctor’s smartphones.

The Virtual Medical Assistant collects data every two seconds, providing spot data and analyzing trends, to tell whether a patient is experiencing deteriorating heart and respiratory readings, is in danger of falling, or requires pressure ulcer prevention management.

The proprietary UWB-based solution developed by Sensiotec “sees inside the body” by acquiring and processing patient data through the transmission of nansecond pulses, 20 million times weaker than a cell phone, which detect micro movements from the heart, lungs and torso, that are digitally separated, filtered and processed to generate critical heart, respiration and movement data. The data is streamed wirelessly using a ZigBee wireless mesh network. 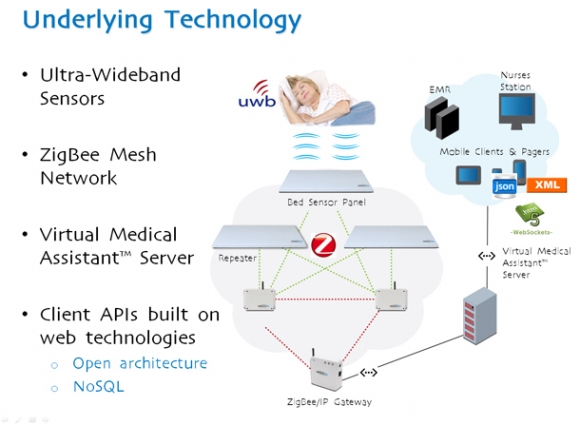 The system even features an API allowing developers to easily build custom applications for visualizing and interacting with data collected by the technology. The API also enables integration of data with various EMR systems without the added complexity of an HL7 interface. This will enable providers using the system to prove Meaningful Use of electronic data and help them earn their HITECH incentive payments.

This is the first major attempt to commercialize UWB technology that I am familiar with, which is a very exciting development and a likely signal that many other UWB companies are coming down the pipeline. Its easy to imagine technology of this nature could have a dramatic impact on the cost of providing care. This is also one of the few devices to utilize ZigBee wireless, which is a very low power, low data rate solution.

The video below was produced by MedCity News and shows Sensiotec CEO Robert Arkin discussing the company’s patient monitoring technology.