Jawbone UP review: A less expensive alternative to the FuelBand with compromises 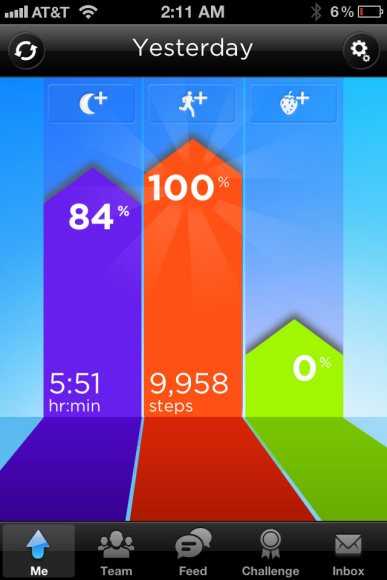 One thing I really applaud Jawbone for is its straightforward and beautiful use of the iPhone app. While some might view the lack of a website as a negative, I actually found the focus on just using an iPhone app to be effective. With their on-device displays, the Fitbit and FuelBand already take away much of the user’s need to utilize their respective apps and websites.

Furthermore, unlike its competitors, the UP does not even require any computer at all for setup or for regular use.

The app is quite aesthetically pleasing, while being able to contain quite a bit of information. The primary display consists of three primary metrics: the left displays sleep quality, the middle indicator gauges number of steps, and the right column counts the number of meals photographed. By tapping on either column, you are taken to a screen that allows you to change your goal or view a record of individual days (or nights).

From that screen, tap one more time on a specific day or night, and it will pull up a graph of that portion of time, plotting out number of steps or movement during sleep. 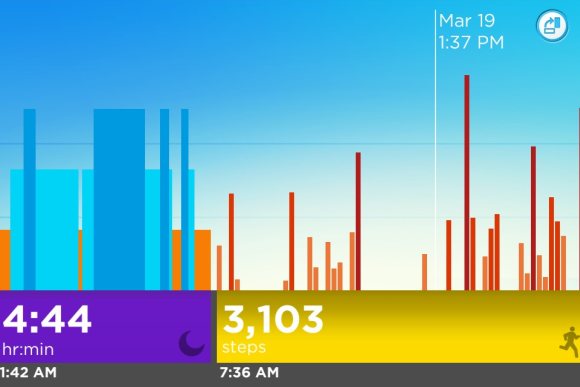 From the home screen, rotating the iPhone to its side brings up a continuous timeline going backwards in time with demarcated times of sleep, walking, and exercise sessions. Dragging the timeline gives you a minute-by-minute graph of what was taking place at that time. In a nice touch, the background also changes appropriately as you scroll through the day, going from a light sky hue during the day to a sunset hue during the night.

The app is also how settings are changed on the UP band. Using the menus, you can change features such as the Smart Alarm, Activity Reminder, and then you sync the app with the UP bracelet using the headphone port, as described above. The app also is able to track a run with GPS, and add it to the activity record.

Lastly, the app offers limited social functionality, such as the ability to add teammates and track their data.

Unfortunately, the data is not automatically pulled from your address book or facebook, so adding friends with Jawbone UP bracelets is challenging (especially given the manufacturing defects).

Conclusion: Excellent Sleep Tracker, But Too Little Too Late?

When the Jawbone UP hit the market, I drove out of my way to eagerly buy it. I was genuinely excited about this futuristic bracelet that tracked activity and sleep, AND synced with my coveted iPhone. At the time, it presented a nice contrast to the more traditional Fitbit Ultra, and both sold for $99.

Unfortunately, the UP was plagued by manufacturing defects, and still has yet to return to market shelves. In the meantime, the Nike FuelBand came in and swept away much of the original appeal and hype of the UP.

Now, the UP stands in an interesting middle ground between the FuelBand and Fitbit Ultra in terms of trendiness and utility. The UP ($99), while not as hip as the FuelBand ($149), still offers a trendy wristband form factor and includes a more complete set of features (with sleep tracking, smart alarm and activity reminders) at a lower price.

However, the price drop comes at the expense of the FuelBand’s wireless syncing and beautiful LED screen. Compared with the practical Fitbit Ultra ($99), the UP has a bit more pizazz and visibility, although the torso-based Fitbit Ultra exceeds the UP in features and data collection with its altimeter and accuracy.

If the UP returns to the market in its current form, the primary advantages it offers over its competitors are through superior sleep tracking and smart alarm. While the UP is a very useful, likable, and effective device, I would suggest most buyers choose between the stark contrast of the versatility and utility of the Fitbit Ultra and the oversimplified it trendy FuelBand.

For those seeking a balance between the two, however, the UP might be worth a closer look.