Jawbone UP review: A less expensive alternative to the FuelBand with compromises

Continuing our series on activity trackers and their role in the gamification of health (see reviews on the Fitbit Ultra and Nike FuelBand), the Jawbone UP was released last fall to quite a bit of fanfare. Jawbone had established a solid reputation with their highly-acclaimed bluetooth headsets, which combined top of the line functionality with sleek and stylish designs.

With the UP, they hoped to continue their success into the burgeoning fitness technology market by releasing a slick, revolutionary device worn around the wrist, at a reasonable price of $99.

Unfortunately, shortly after release, reports came piling in of a device-breaking defect that affected a large majority of users.

This PR nightmare led to Jawbone taking the extreme measure of issuing full refunds to every owner (with promise of replacements when the issue is resolved), and the UP was pulled from the market.

As an original buyer of the UP, I was able to obtain a replacement that seems to be unaffected by the defect. Does the UP have enough for Jawbone recover from this significant setback, or has Nike stolen its thunder?

Hardware: Lives Up to the Jawbone Reputation, But Lacking a Screen 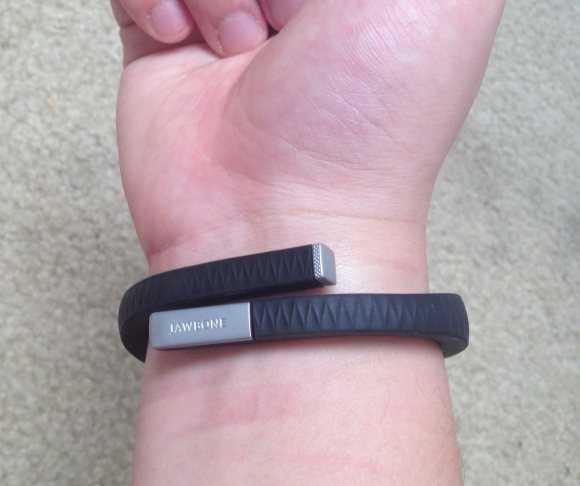 When the Jawbone UP hit the market, it was a one of a kind device. The FuelBand still did not have a release date, and the Jawbone was on store shelves, as a uniquely trendy wrist-worn pedometer that communicated with the iPhone. Like the Fuelband, it resembles a black Livestrong-style bracelet, but unlike the FuelBand, it wraps around and clings to the wrist, rather than requiring a clasp. Also unlike the FuelBand, the Jawbone tapers significantly on the ventral aspect of the wrist (although it remains nearly equally thick on the dorsal aspect). 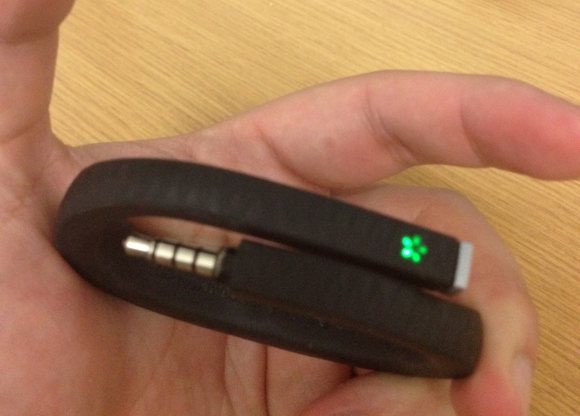 There is only one button on the UP, which is activated by pressing one end of the bracelet. The other end consists of a headphone-style jack covered by a removable cap. Immediately next to the end with a button, there are two small hidden LED indicators. One is a star icon that shines different colors to convey different messages, and the other is a blue moon icon that shines when you activate the sleep-tracking mode.

Unfortunately, while the tapering width and clinging design provides a lighter and less cumbersome design than the FuelBand, the UP lacks the ability to output information via a screen. After using the FuelBand and UP, both of which have informative screens, its absence on the UP is notable, although the option to sync with the iPhone to display data is always readily available.

Syncing: Innovative, But Not Wireless 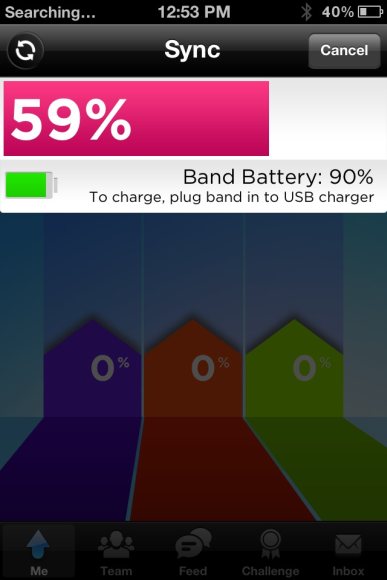 In about 20 seconds, the sync is complete. It actually is very straightforward, but in the end, it is still not wireless, and requires user intervention every time to sync. There are a few silver linings, though, with the UP’s method of syncing.

The data transfer process itself is significantly faster than the FuelBand (which can take minutes), and it does encourage more active usage of the well-designed app, since this is the only way of viewing data. Whereas the FuelBand and Fitbit provides a small amount of information on its LED screen which often obviates the need to utilize their respective apps, the UP forces you to utilize the app to see ANY information, thusly exposing you to its app’s informative charts and graphs.