Disclaimer: I have no relevant conflict of interest relationships to disclosure, and have no affiliation with the makers of iBGStar.

Recently making it’s debut into the online Apple Store is the much hyped and anticipated iBGStar Blood Glucose monitoring system by Sanofi US.

Although the peripheral device had gained clearance by European regulators more than a year ago, only at the end of last year did the glucose monitor receive FDA 510(k) clearance.

The peripheral device connects to your iPhone or iPod Touch and allows patients to record their glucose levels using the accompanying test strips.

The accompanying app and sync capability is where this iPhone medical peripheral truly shines. The app allows patients and physicians to analyze glucose levels in a multitude of ways, and hopes to allow better glycemic control and titration of diabetes medications.

Although I’ve been skeptical of some iOS health peripheral devices in the past, I think iBGStar is a different beast. Even though the majority of diabetics might not be able to afford it or have access to it, it shows a great fusion between mobility, software, and hardware.

Leading me to believe there are three reasons why Physicians should consider prescribing this device to patients:

I preface this by saying the iBGStar peripheral device and app combination are by no means a home run, and there are serious drawbacks physicians need to consider before recommending the device to their patients.

The app then tells patients their glucose levels and appropriately records them, allowing patients to add key information such as carbs, setting, and other key notes.

I’ve used Withings’s body scale device, and the setup required for iBGstar is definitely easier. The ease of use of iBGstar is essential for patients who are not tech savvy. There are also great tutorial videos that break down how the device and app are to be used. 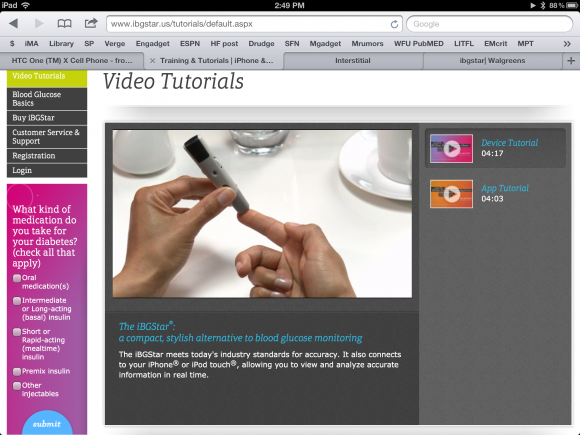 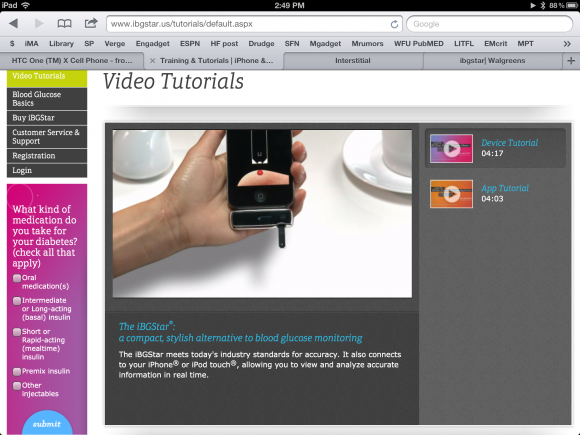 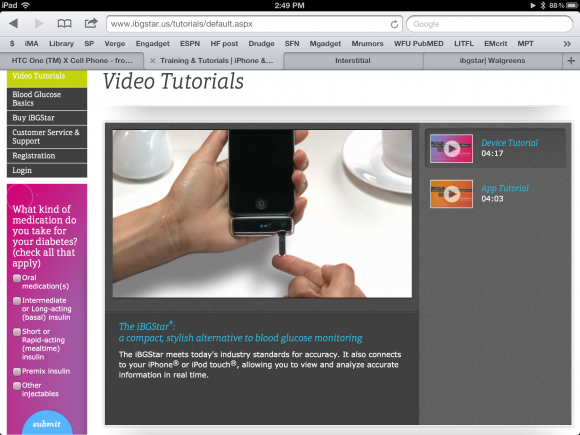 The device is now widely available. It can be picked up at your local Apple Store or your local Walgreens, or bought at their online stores.

The device is priced at $99.99 at the Apple Store, however, it’s cheaper at WallGreens, selling for $74.99; We’ll get into the issues with the total cost to own in a price breakdown later in this article.

I’m always hesitant to recommend products to patients that are only available online, and having major retailers carry the device make suggesting it to patients much easier. You are at least assured your patient can go back to their local retailer if the device doesn’t work or if they aren’t fond of it.

One of the largely unheralded features of the app is the integration with iPod Touch devices. As of last year, iPod Touch devices made up to one third of iOS sales, and for parents who have children with type 1 diabetes but don’t want their young ones to have an iPhone, an iPod Touch is a viable option.

Seamless integration between peripheral device and iPhone or iPod touch:

With the iBGStar peripheral in tow, you get a great marriage between a mHealth peripheral and mobile phone.

The app is the true gem of this marriage. The app allows meticulous recording of blood glucose levels. The following screen shots of the app show the level of customization that make the app shine: 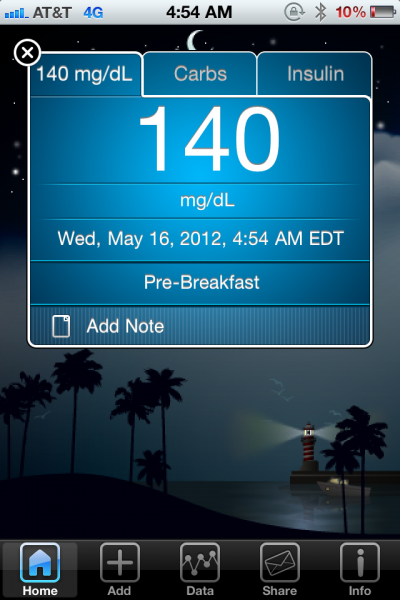 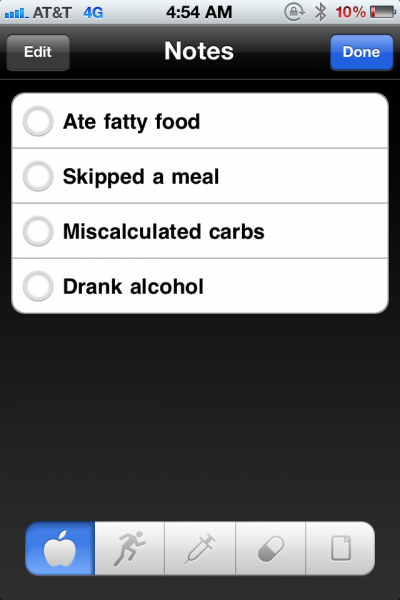 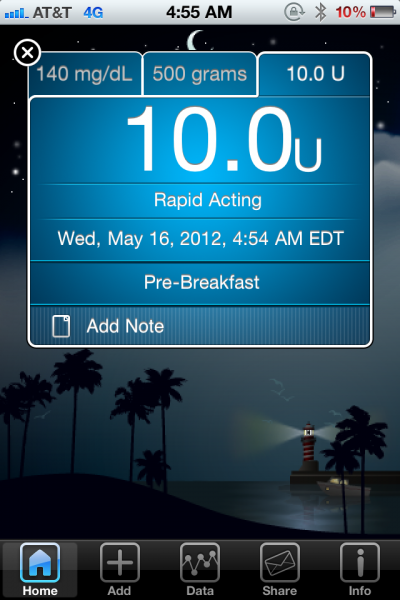 The highlight of this app is the analytics offered to not only patients, but physicians. The app allows patients to email their physicians detailed glucose reports, using various breakdowns: 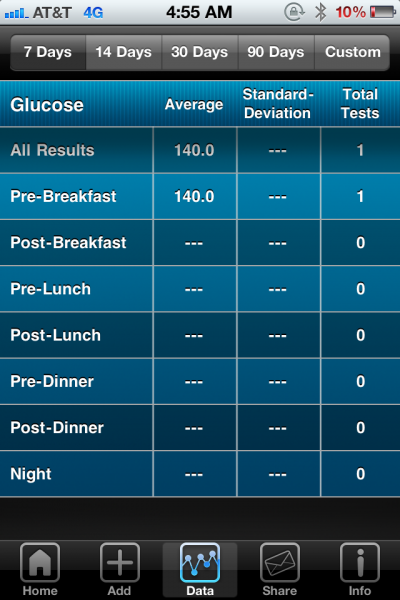 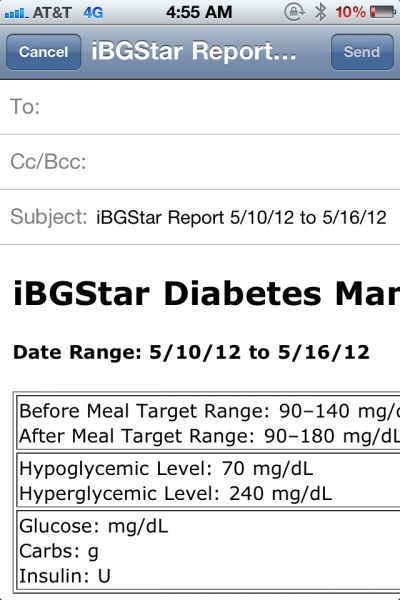 Using this data, physicians can appropriately titrate up or down various diabetic regimes.

There are obvious as well as subtle drawbacks to IBGStar — namely, price and form factor:

Customers in the U.S. can buy the glucose meter from their local Apple Store or the online Apple Store for $99.99. Walgreens is actually selling the peripheral for $74.99. Those with diabetes and in healthcare know the price of the actual device often isn’t the limiting factor, rather the test strips are. Unfortunately, the strips will set you back, costing a little more than $1 each, more than twice the amount of typical test strips. So for a patient that uses three test strips a day, the test strips cost approximately $100/per month. Sanofi does offer a program to help patients pay this cost.

For mobile, unfortunately, there is a premium.  And this premium will clearly price the peripheral out of  range for a significant patient population.

The iBGStar peripheral has a small form factor, which is great, but it doesn’t take into account next iterations of the iPhone. There have been rumors Apple will do away with the standard dock connector, and if this happens it would make the iBGStar useless for patients who upgrade to the next generation iPhone.

Will this device help your patients achieve better glycemic control?

I don’t know. And those who claim it definitely will are doing so based on hype, not definitive evidence based data.  There is evidence to suggest mobile devices used for diabetics improve glycemic control, but a legitimate clinical trial needs to be done with iBGStar before this claim can be made. There is evidence that shows iBGStar is as accurate as other blood glucose meters, but again, no legitimate large clinical trial that shows it improves glycemic control.

There is one facet of this peripheral device that can’t be ignored. It has the potential to improve the patient physician relationship, and offers physicians a way to add value to patient visits.

Recently I had a patient in the pediatric emergency department who presented with hyperglycemia without DKA. I called their endocrinologist who said they would be more than happy to work with the family to achieve better glycemic control.  The endocrinologist asked the patient to send in their glucose logbook to the clinic and based on the logbook, suggestions would be made.

Imagine if the family could have sent an immediate email using their mobile device to their physician and have received real time suggestions? Or, imagine if the app and mobile hardware marriage had helped the family maintain better glycemic control, helping avoid the the Emergency Room visit altogether.

Thats the hope for iBGStar, and really, for mobile medical technology in general.

Disclaimer: The recommendation of prescribing or suggesting this device to patients is up to their physician, and in no way does the author of this post suggest patients should use this device for glycemic control. This post does not constitute a patient provider relationship between the author of this post and the reader. The decision to purchase this device and the method of use is strictly between a patient and their personal health care provider.