Diagnosaurus DDx on Android is a comprehensive diagnostic resource

One medical app subspecialty which has succeeded particularly well since the introduction of mobile technology is differential diagnosis support. Apps that make sure you don’t miss a crucial diagnosis are popular on the wards and for good reason. One which was particularly well is Diagnsosaurus which we reviewed the iPhone version of back in 2009 and loved it.

In that article we listed the positive and negative qualities that we found with the app.

Now let’s take a look at its cousin on the Android.

Diagnosaurus DDx from Unbound Medicine is a medical app that helps you formulate differential diagnoses based on either signs and symptoms or clinical findings.

This app is not meant to make the diagnosis for you, but rather assist you in reaching a diagnosis and guide further work-up. 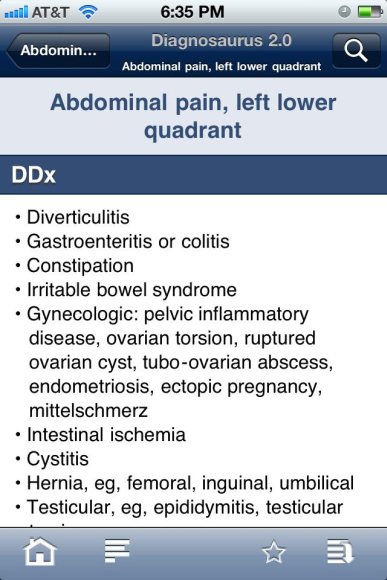 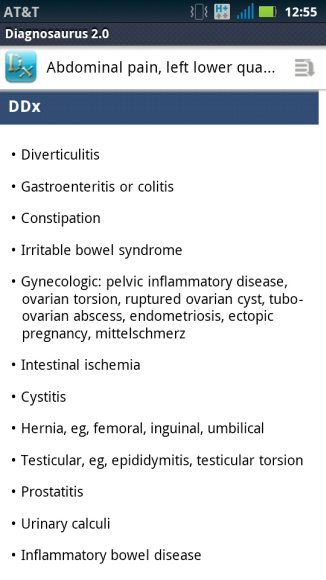 From the first time I used this app on my old iPhone 3G to now using the Android version, not much has changed. The Android app still has the same familiar interface with the same core structure that also mirrors its website counterpart on Access Medicine.

The only major difference you may notice on the Android version is the different (and nicer) fonts and the increased screen space. This is due to the elimination of the tool bar on the bottom thanks to Android’s dedicated menu and search buttons. With the extra space, the content is much more readable with less need for scrolling. When searching, Google’s speech recognition replaces Apple’s but, not  surprisingly, still fails miserably with medical terminology. 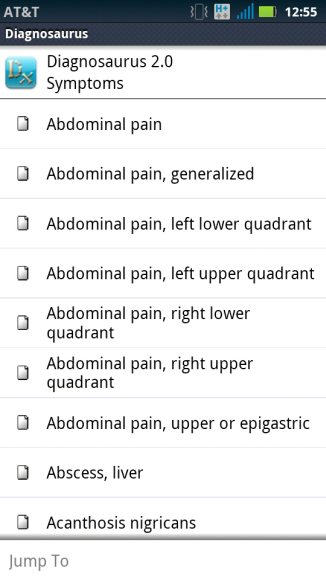 Diagnosaurus DDx, like other apps from Unbound Medicine, is clean and minimalistic. You won’t be impressed by any innovative design or illustration element. Other than the title screen and the app icon, no other images are included in this medical app. That’s okay, though, since the emphasis is on the content. The whole app is completely text based and all data is stored on the phone. Not only does this mean no internet access is required when using this app, but also means an almost guaranteed no lag experience with instantaneous reaction times. 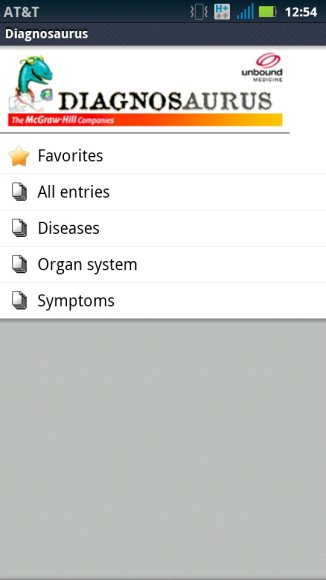 The differential diagnoses are categorized by Disease, Organ System, and Symptoms. Each with its own unique approach into finding the differentials you want. For example, under Diseases you will find “acute renal failure,” which will list all the differentials for prerenal, postrenal, and intrinsic renal diseases. Under Organ System, you will not only find the usual subcategories such as “pulmonary” and “cardiovascular”, but “EKG” and “laboratory tests” as well. The Symptoms category will give you differentials on common complaints encountered in the clinical setting, i.e abdominal pain. 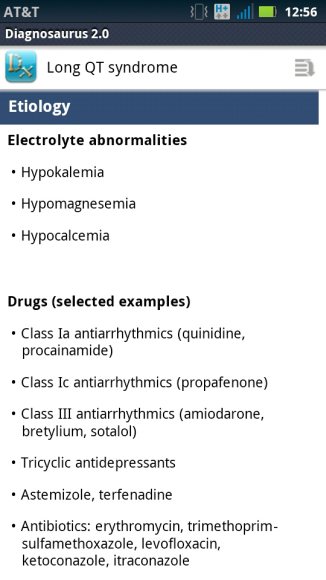 Although Diagnosaurus DDx is divided into 3 main categories, in the end, I found myself using the search function most of the time, rather than browsing through its endless lists of diseases and symptoms. Some pretty cool examples that I have discovered on this app are differentials for “EKG: long QT”, “loud P2”, and “hypercalcemia”. Almost any clinical situation that I could think of I found on this app. The only instance when the differentials were unhelpful and too broad was under “Fever”, but that is probably my own fault for looking up such a nonspecific symptom.

I have been using Diagnosaurus DDx since the beginning of my clinical rotations as a medical student, and I have definitely benefited from its quick differentials on my “H&P’s and progress notes and during teaching rounds and pimping sessions. Diagnosaurus DDx had also been a helpful study tool for my shelf exams and USMLE Steps. 3 years later, I still find this app to be one of the best medical apps on the market and an irreplaceable part of my smartphone arsenal. If not obvious enough already, I absolutely love this app.