Making user-friendly products is no easy task, but it is worth the investment as multiple examples from various industries have demonstrated.

According to researchers, the aim of the review was to develop “a conceptual framework to define the range of design features that could be used to deliver the content of health interventions delivered using the Internet.”

The framework applies to interventions internationally, and were not limited to research in the UK. The researchers stated that the purpose of developing this conceptual framework was “to permit analysis of how specific feature(s) of intervention design may influence health-related outcomes.”

In an effort to justify the need for this work, the researchers stated that existing papers on e-health interventions have identified a range of design features that influence user satisfaction and behavior change, but these papers have not provided “a comprehensive description of design features that can be used to deliver interventions and have not systematically examined how specific features contribute to outcomes.”

With this tall order in mind, the researchers performed their review.

In total, the researchers reviewed 52 articles with effective e-health interventions. They focused mainly on Internet interventions that provided health promotion information to patients in order to help them manage their diseases.

The researchers used a unique approach to assessing existing literature. They did not use a systematic review methodology which is common to most review articles. Instead they used a method called Critical Interpretive Synthesis to identify a sample of articles which helped them conceptualize how design factors affect intervention outcomes.

The theoretical sample was used to clarify the hypothesis created with the diversity sample. The representative sample was used to “test” the conceptual framework developed with the first two samples. This approach allowed researchers to assess the generalizable nature of the hypotheses developed using the other samples. Ironically, this final sample drew on past systematic review findings suggested to the researchers by experts, even though the initial idea of the researchers was to not conduct a systematic review.

The review led to the selection of four interactive design features which affected the success of e-health interventions. They were:

Below are brief comments about each design feature are below

This design feature was grouped into three subtypes: 1) Simulation of person-to-person interaction (e.g., automated dialogue, avatars); 2) provision of synchronous- (e.g., chat rooms) or asynchronous-mediated contact with other users; and 3) provision of information about other users (e.g., social norms, vignettes). The researchers found that automated dialogue components, synchronous- or asynchronous-mediated communication with peers, or information about other real users of an intervention may positively affect intervention outcomes. These features seem to all provide some human connection for the users of the intervention. They are able to receive advice from people (experts or peers) and hear about other people using the intervention along with them,

The researchers divided this feature into two subtypes: 1) expert-initiated contact; and 2) user initiated contact. In addition, they further divided the expert initiated contact into: A) contact delivering behavior change techniques (e.g., motivational emails); and B) contact promoting intervention usage (e.g., e-mail reminders). They noted that the contacts delivering behavior change techniques may be more effective than simple reminders to use the intervention. This finding seems to support the idea that people prefer a more personalized approach similar to the researchers “social context and support” findings above.

The third design feature tailoring refers to the “provision of information relevant to one individual person and can be based on theoretical constructs, behavior, or demographic characteristics” according to the researchers. Researchers found that tailoring based on greater numbers of variables may be more effective than tailoring based on just one variable. In other words, more personalized interventions are better than less personalized interventions similar to the prior two design features discussed.

This design feature was divided into two subtypes: activity planning and self-monitoring. The researchers found that self-management strategies that include behavior change techniques which were grounded in clear theoretical concepts were likely to be more effective. 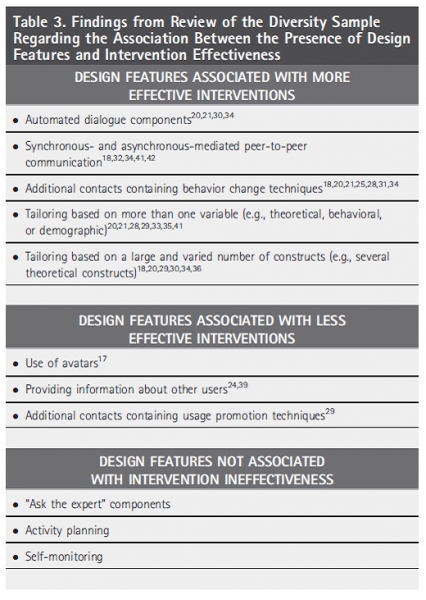 For each design feature the researchers provided a number of useful research questions that other researchers focused on particular design features or companies looking to engage in research and development in order to improve their design can benefit from.

As the researchers note, they were not attempting to test the hypotheses but simply to offer them as a way of explaining how a design feature might impact the outcome of a health intervention. In this same vane, the researchers indicate that “ the hypotheses and framework proposed do not represent all possible interpretations but present one potentially useful perspective.” Thus, more hypotheses could be generated which might lead to different results.

In classic fashion the researchers called for more research on how design features affect outcomes of interventions in order to guide individuals designing e-health interventions in the future. Such an approach can eventually lead to best practice approaches to designing e-health interventions of various types. The researchers also make an interesting point that negative research findings in this area should be reported so that design features which do not work can be noted and not repeated in the future.

Similar statements have been made about other areas of health care research. Existing journal publication approaches are not so useful for this type of negative reporting, but perhaps online databases – maintained by institutions or government – could offer such findings to researchers.