This open platform will allow these software developers to make apps for scientific customers who want to sort and quantify reams of DNA data.

App stores are becoming more and more popular, as we see with Happtique, who we previously reported  was creating a custom app catalog of mobile health applications that will be used in hospital and physican practice settings. Illumina represents the next iteration of this concept–a niche market for app development.

“This new initiative is called Basespace Apps, and will enable researchers to store their data on cloud computing infrastructure provided by Amazon Web Services, and then make it possible to download various genomic software “apps” to analyze and interpret the data.”

The idea behind creating the Basespace Apps platform is to enhance the value of their MiSeq benchtop DNA sequencing instrument that is also created by Illumina. They accomplish this by allowing third-party software developers to write programs that take advantage of the DNA instrument in new and unique ways.

While Illumina’s hardware is widely used, there is still problems interpreting the plethora of data that is generated. Basespace Apps hopes to address this by providing interesting software apps that cater to various needs. 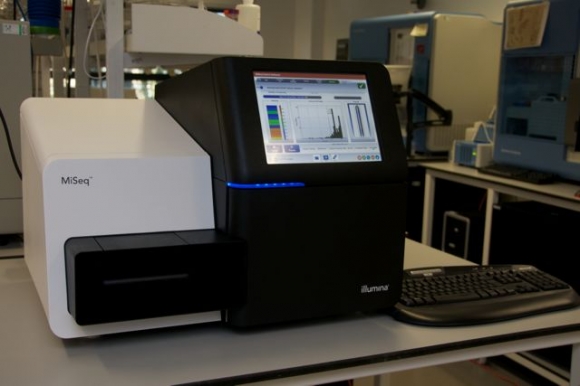 “If you have a strong position in hardware, it’s very interesting to create a place where people can do a couple different things. One thing is in the cloud where data is stored and interchanged. But if you can layer on that a world with a lot of bioinformatics players, a lot of people can figure out how they’ll ride the wave. There’s an interesting chance to draw all these concepts together at Basespace.”

While the exact method of monetization has not been disclosed, if Illumina is following the Apple App Store model, they may charge a 70/30 split for revenues generated from the Basespace App store. “We want to make sure the apps are reputable and not doing bad stuff. There will be a certain amount of governance,” Dickinson says.

They are also looking at ways to monetize the DNA sequencing data stored currently on Illumina’s Basespace cloud storage system–which runs on Amazon Web Services’ cloud infrastructure and is currently offered free to customers using MiSeq instruments. A monthly subscription fee has been suggested as a plausible solution.