Striiv (@striiv) issued a major update to its Smart Pedometer with its new Activity Motivation System.

It allows users to connect their devices using unlicensed wireless spectrum over short distances, enabling them to exchange personal activity stats, as well as issue one-on-one activity challenges with real world prizes such as coffee or chores for the winner.

The company also announced the second generation of its device will be available at Best Buy retailers nationwide beginning April 29th for $99.

“Striiv isn’t just for athletes or data-driven early adopters. It’s for everyday, busy people who also want to get fit, give back, and have fun. Striiv is fitness for the rest of us,” said David Wang, co-founder and CEO of Striiv in a press release.

“Research shows getting fit doesn’t require a gym or a crazy routine. It’s about seizing dozens of opportunities throughout the day to move more and then enjoying the countless benefits of a more active and healthy life.”

The new Activity Motivation System includes several new features, as well as enhancements of features included in the initial Striiv device, including;

I recently covered Striiv’s announcement of several very promising user metrics. For example, the average user walks 90 minutes and 3 miles per day, as well as climbing 12 flights of stairs per day. Even after twelve weeks, most users still check their device multiple times per day, with the average user checking the device 29 times daily.

“There has been a surge in interest in mobile health devices and Best Buy is committed to meeting that demand by carrying innovative products like Striiv,” said Alan Smith, senior merchant for Health and Fitness at Best Buy. “Striiv is especially important because it has the potential to positively affect the well-being of the average person who just needs a little motivation. We’re proud to carry Striiv on our shelves across the country to help make a positive impact on the country’s overall health and well-being.” 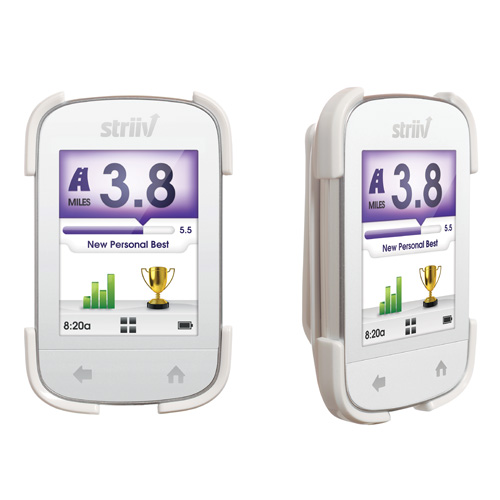 I am a bit surprised the new Activity Motivation System doesn’t include more of the altruistic motivators that really distinguished the original Striiv device, such as the donation of vaccines or drinkable water to children in the developing world upon meeting specific activity targets.

There is no indication these features have been curtailed in any way, but I think this was the real differentiator for Striiv and the company would have been wise to continue to emphasize them in updates such as the one announced today.

The Striiv Smart Pedometer is $99.95, is now available on BestBuy.com. and will be in Best Buy stores by April 29. It is currently available on HSN.com, Amazon, and striiv.com.