Is the day of the hospital pager coming to an end?

Well, not yet, but the use of pagers in the hospital is being challenged by new wireless technological solutions.

Since 1949, pagers have remained one of the most commonly used technologies among all hospital personnel. However, researchers in the United Kingdom are looking to change this. They recently assessed whether a new wireless system can decrease some of the efficiencies of pager systems in hospitals.

The researchers designed their wireless system to address a problem which occurs in health systems throughout the world. The problem being that most health care personnel work during regular 9 to 5 work hours, but patients are in the hospital much longer (16 hours longer during any given day).

As a result, there is a drop in hospital services after regular work hours.

The researchers also indicated that with decreased work hour standards for their junior doctors (same as residents in the US), there is an even greater drop in services in the hospital. In the UK, this night time drop in services is being managed by an initiative called “Hospital At Night” in which senior nurses triaged night time problems and coordinate existing hospital resources in an effort to improve clinical care and decrease any potential safety problems associated with having more junior people in charge at night.

The Hospital At Night project is run mainly with landlines which leads to a number of inefficiencies that impact patient care. The main problem is a common scene in hospitals relying on landlines for communication. Clinical care is delayed by the nurse coordinator constantly paging doctors and waiting on their responses.

Another problem is that junior doctors often waste time searching for a landline to use. These problems lead to delays in clinical action being taken. Also, there has been low morale for the senior nurse coordinator who spends all night talking on the phone and not engaging in clinical care and truly using her/his skill set. As a result of these problems, the researchers realized that a better approach was needed.

The researchers at Nottingham University Hospital worked with a private company, NerveCentre Software, to develop software to address their inefficiencies. They also purchased a “Medical Grade Network” from Cisco Systems. This is a secure wireless network system developed for health care institutions’ unique privacy and confidentiality needs. Both changes led to a new task allocation and management system in the hospital that was completely wireless.

With the new system, tasks are entered into the system and sent wirelessly to the nurse coordinator who carries a wireless tablet PC. The coordinator assigns the task to a team that receives the information on their mobile phones, which are dedicated to hospital work. The team can accept or reject the task. Once accepted the task remains visible to the team and to the coordinator until it is complete.

This allows for easy follow up and easy transfer of tasks when the shift ends for a team and the need to hand over current tasks to a new team. The system also allows for tasks to be prioritized using a color coded system. With the new system, only the cardiac arrest team carries pagers as a backup to the new wireless system. The new system removed multiple inefficiencies from the old system. 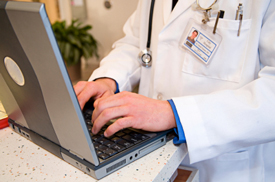 Figuring out if the potential solution works

In order to assess the effectiveness of this system change, researchers reviewed clinical incidents two months before and after the system was started. They focused on incidents that occurred after regular work hours and were associated with the handover of information from one shift of workers to another. They compared the percentage of clinical incidents related to slow response of the Hospital and Night service before and after the new task allocation system started.

Staff satisfaction with the new system was also analyzed through interviews of all personnel who used the system. Some staff were also asked to fill out a survey analyzing the usability of the system (IBM Computer System Usability Questionnaire). Researchers also assessed how the new task allocation system impacted the work of the nurse coordinator by monitoring their activity for a week before the system started and one year after it started. The mean length of stay for patients in the hospital was also measured by researchers for 6 months before and after the new system. The system cost less than $238K to implement and no cost-effectiveness analysis was performed

Overall, the results of the study demonstrated that the new system had a positive impact. Of the 1,104 clinical incidents reported before and after the new system, 13 were associated with inefficiencies in the Hospital at Night system and also caused harm to patients. 9 of these occurred before the new system and four after, demonstrating a drop in these type of events that was statistically significant. The researchers did not indicate what type of events occurred before and after which would have provided a better understanding of how important the changes were. The new system also led to a significant drop in cardiac arrest calls for patients who did not actually have cardiac arrest. Thus, the tool may provide some unique benefits for cardiac arrest teams.

Personnel were highly satisfied with the new system, feeling as though it allowed them to focus on clinical care instead of spending so much time on the phone. Some people even indicated that they continued working at the hospital because the new system was being implemented. The new system also created better overall communication among staff. For example, doctors who are facing a difficult clinical situation and unable to get to a lower priority patient can easily let people know without searching for a phone to call someone.

The prioritizing feature of the system also allowed junior doctors to make sure they took care of the most important problems first. Prior to the new system, coordinators were not clear when tasks were completed by teams, now they are. The system helped improve the accountability of junior doctors and the teams they worked with in this manner. Probably most importantly, doctors were not distracted from their clinical duties by pages and having to search for phones. They can continue clinical care and still monitor the new tasks being assigned to them. The tool also helped senior doctors analyze how junior doctors are performing as well as the workload they are handling.

The new system also turned scribbling on paper by junior doctors or nurses into legible information which decreases basic mistakes that are often made in hospitals when information is gathered by phone. The new system required the entry of all the basic information doctors need prior to providing services to a patient (such as location of patient, name, primary diagnosis, reason doctor’s services were requested, etc.).

Also, measures of usability indicated that there was increased satisfaction with the new system. The nurse coordinators were also able to engage in much more clinical care as a result of the new system making their triage duties more efficient.

There was a small but significant drop in the median length of hospital stay after implementing the new system indicating that the system may aid in decreasing health expenditures.

Overall, this intervention represents a useful application of wireless in a large hospital system and should encourage other health systems to try this approach and study its effects on both personnel and patients.