Researchers at Wake Forest University have created a new “fabric” that could change the way that mobile medical devices from smartphones to wearable sensors are powered.

These fibers are able to use temperature differences to create a large enough charge to power up a smartphone. For that matter, this fabric could power a range of mobile health devices, transforming the way these devices are designed and deployed.

Generating electricity requires some energy source that can be transformed into a current; heat differentials are one such source. As explained by a CNN report on Power Felt,

“So, for example, you could slap a strip of it onto the back of your phone and hold it in your hand or stick it in your pocket while you walked. Since your body heat would be higher than the temperature outside, it would create one of those differentials and the felt would siphon off that extra heat, turning it into electrical power. “

David Carroll, Director of the Center for Nanotechnology and Molecular Material, helped create this new nanofiber material. He believes that heat differentials are all around us and that there are many wasted opportunities to take advantage of this.

“The felt probably isn’t ready to charge a phone all the way. But a regular day’s activity could add an hour or so to its battery life. If you’re at the airport and your phone’s dead and you’re trying to get your wife on the phone to come get you, what you’re concerned about is being able to make that one extra call.”

One could also imagine this kind of technology being incorporated into implantable devices, particularly those in the subcutaneous tissue, to supplement battery life. 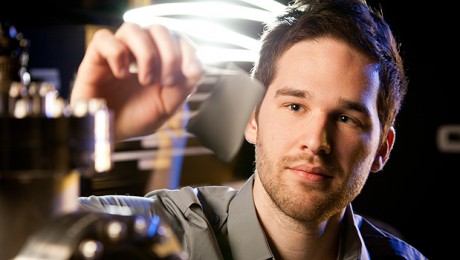 According to the article, when the technology is “reversed”, the nanotubes can also move heat away, producing a cooling effect that could be helpful for medical care. With the growing use of therapeutic hypothermia after cardiac arrest, it nots hard to see these devices applied in external cooling protocols such as those currently using Artic Sun devices.