Nike FuelBand Review: An Exciting Entry into the Gamification of Health

We’ve been closely following the gamification trend in mobile health, and Nike has taken it to the masses by recently releasing the Nike FuelBand ($149) to immense demand and sold-out inventory.

The FuelBand joins the other two current players in the fitness tracking market released in the fall: the Jawbone UP (currently not on the market after being recalled; $99) and the Fitbit Ultra ($99).

I tested all three devices for the past two weeks to see if the extra $50 for this device really equates to more than just marketing and the Nike Swoosh.

First up for review is the Nike FuelBand. (Check back for individual product reviews, followed by a comparison review).

Hardware Design: Nike Does Not Disappoint 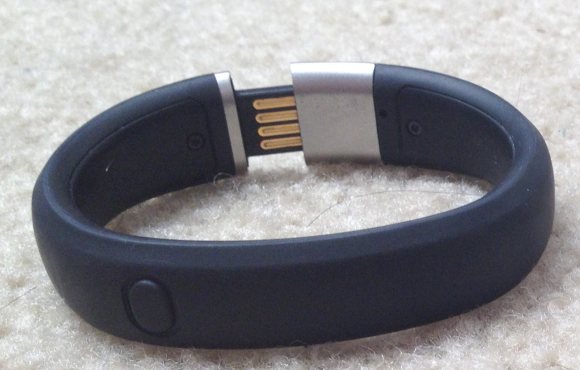 The FuelBand looks like the offspring of a black Live Strong bracelet and a thin wristwatch. It snaps around your wrist via a clasp emblazoned with a Nike Swoosh.

In addition to being available in 3 sizes (small, medium, large), the band comes with 2 extra spacers that can be added to adjust its circumference. While its rubbery surface stands up well against abrasions, its shiny metal clap is particularly susceptible to scuff marks. 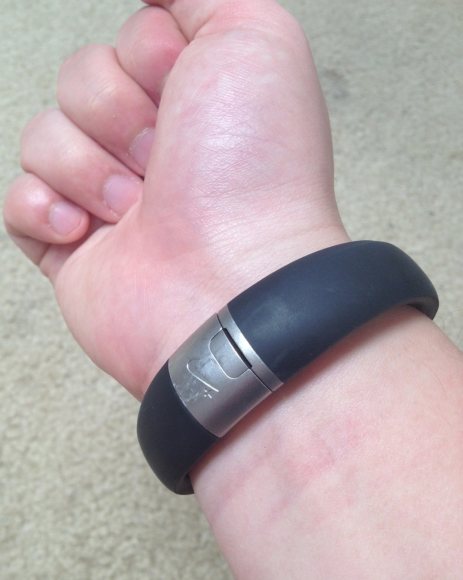 Whereas Apple’s Retina Displays impresses with its high resolution, the FuelBand’s 20 x 5 pixel resolution impresses with its slick animations and simplicity. The display lights up out of seemingly nowhere on the black surface, showing the time and various statistics as they sweep across the screen.

Pictures simply do not do it justice. 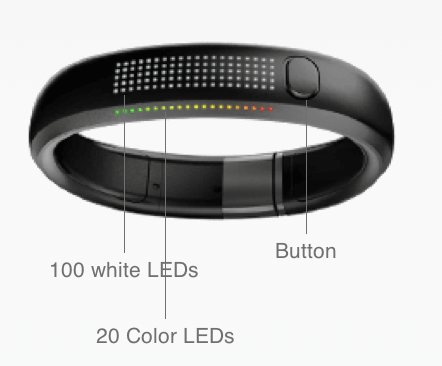 It deserves to be mentioned that the FuelBand features a clock that shows the time, essentially eliminating the need for a watch. While it doesn’t display the day or month, I found the clock feature to be quite convenient.

Unfortunately, some of that convenience is negated by the fact that you must press the button to activate the display. I would have at least liked the option to leave the FuelBand as always showing the time. 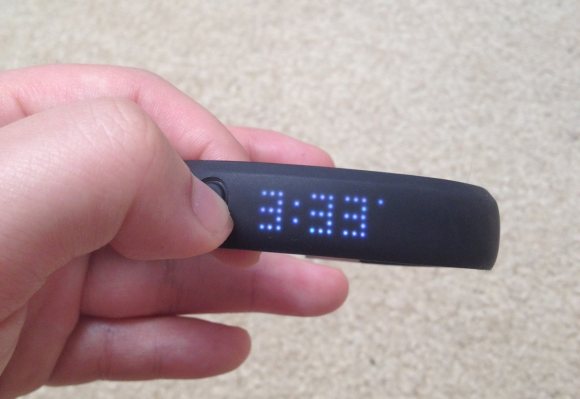 Battery life is advertised as lasting up to four days. In my experience testing the battery, it lasted at least 5-6 days on average before I had to recharge the battery. One critique I have is that there is no obvious way to check battery life without plugging the FuelBand into the syncing cradle.

When the battery finally runs low, a battery icon appears on the display, but until then there is no quick way to gauge battery life, and this led the device to run out of battery once.

Syncing: Bluetooth for the Win

The FuelBand is the only contender out of the three products that syncs wirelessly via Bluetooth to the iPhone. You simply:

It really is just that simple, although the entire process did take noticeably longer than I expected. Logging about 7 days of data took approximately 45 seconds, and the app must remain open during this time. Overall, though, the process is so smooth that it’s a shame that the Jawbone UP and Fitbit Ultra don’t utilize Bluetooth.

For those that don’t have iPhones or prefer a more traditional method, the FuelBand also comes with a small USB cradle that charges and syncs the FuelBand with your PC or Mac.

What It Measures: Activity, but No Sleep or Meal Tracking

The FuelBand utilizes a 3-axis accelerometer to measure activity, recorded as one of several statistics: Nike Fuel, Steps, Distance, and Calories. Nike sets itself apart from its competitors by focusing much of the user’s attention on Nike Fuel, which will be discussed at length later in this article. I was disappointed to find out that the FuelBand does not currently allow any support for tracking meals or sleep, both of which can be found on the Fitbit Ultra and Jawbone UP.

Measurement Accuracy: Do You Believe in Nike Fuel? 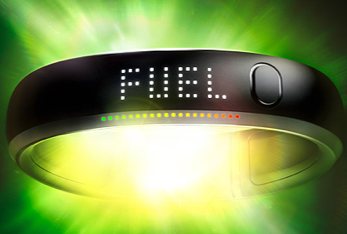 As one might expect from an accelerometer attached to the wrist, the potential for detecting False Positive “steps” is extremely high, although Nike seems to counterbalance this by creating a new measurement in Nike Fuel. Over a 14 day span, the FuelBand consistently overestimated the number of steps relative to the Fitit Ultra (worn on the torso, and presumably more accurate) by up to 25%.

However, many users will soon find that precision in counting exact number of steps does not matter as much as one would think. In practice, both the FuelBand and FitBit Ultra were fairly accurate in measuring relative activity: on my busier, more active days, the devices both measured more steps, and vice versa.

Interestingly, this is where Nike might be onto something by prioritizing Nike Fuel.

In theory, this research allows the FuelBand to accurately gauge the intensity of a certain activity using its accelerometer, as it should be able to differentiate between steps from a short walk and from a rigorous sport. Nike states that an average person will earn approximately 2,000 “Fuel” on an ordinary day, and 3,000 on an active day. The default goal is for 3,000 Fuel every day, but can be changed via either the iPhone app or website.

In order to test the ability for Nike Fuel to differentiate between activities better than a pedometer would, I walked at a very relaxed pace for 30 seconds. During that time, the Nike FuelBand logged 42 steps, and 8 Nike Fuel. Then, I did jumping jacks for the next 30 seconds, and the gadget logged 71 steps and 29 Nike Fuel. While the number of steps measured by the FuelBand differed by about 75% between the two activities, the amount of Nike Fuel rewarded was more than tripled for the jumping jacks.

As a general trend, the amount of Nike Fuel earned on a certain day seemed to correlate fairly well with my level of exertion. I earned significantly less Nike Fuel on my days off compared with my long days in the hospital. On a particularly lazy afternoon, I could earn as little as 300 Nike Fuel, but earn up to 750 during a single workout session.

While promising, the Nike FuelBand is still limited by the fact that it monitors activity via wrist movement. In a similar experiment, I clapped my hands for 30 seconds while seated at my desk. The FuelBand logged 60 steps and 14 Fuel points for essentially no physical activity. Furthermore, when using a stationary bike with handles, the FuelBand recorded zero steps and Fuel points. 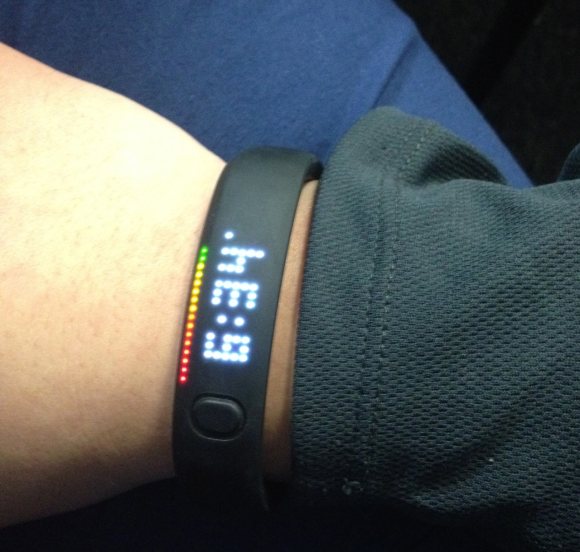 In practice, I was initially frustrated by the FuelBand’s overemphasis on measuring what seemed like an arbitrary statistic in Nike Fuel, but over time I grew to appreciate the simplicity of it all.

By lunch, if I was still under 1,000 Nike Fuel (and my linear gradient was still in the red), I knew I was not being active enough to be on track to hit my goal of 3,000 by the end of the day. When I did a quick run on a treadmill, I would find that I had earned a surprisingly high amount of Nike Fuel. 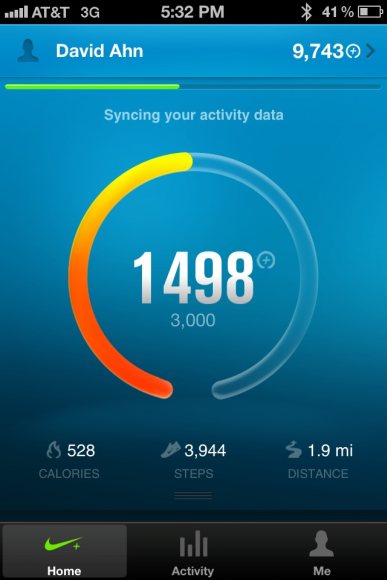