There is no greater challenge facing clinical trial sponsors than the recruitment of patient participants.

For individuals interested in finding trials to participate in there is simply either not enough good and understandable information available to find, or there is too much incomprehensible information to dig through for it to be useful.

Corengi (@corengi), a recent graduate of the Healthbox digital health accelerator in Chicago, is attempting to revolutionize how individuals find and participate in clinical trials with embeddable widgets. In fact, Corengi describes itself as the “AdSense for clinical trials” according to the company’s AngelList profile.

By embedding widgets on third-party websites with significant traffic from a particular patient population, Corengi believes they will be able to connect the most relevant and proactive patients with the clinical trials most appropriate for them based on their location, condition, age and other factors.

Corengi is focused squarely on the diabetes patients, which as of 2011 included an estimated 25.8 million people across the US, greater than 8 percent of the population.

Specifically, they are targeting Type 2 diabetes (T2D), which is characterized primarily by peripheral insulin resistance. There is a significant amount of research being done with T2D patients, but there were no tools available to patients that made it easy for them to  get involved. As a result, sponsors of clinical trials typically allocate as much as $7500/patient for recruitment costs and trials are known to run as much as 5 months behind schedule.

Corengi co-founder Ryan Luce recently published a paper in the Journal of Applied Clinical Trials outlining their findings on what motivates patients to find and participate in clinical trials. In the chart below you can see the breakdown of the various reasons given by patients when asked why they decided to participate in a clinical trial.

About 35 percent responded by saying they hoped to receive better treatment than otherwise available, while 33 percent expressed an interest in helping to advance medical research and approximately 17 percent were motivated by a desire to help others with diabetes. 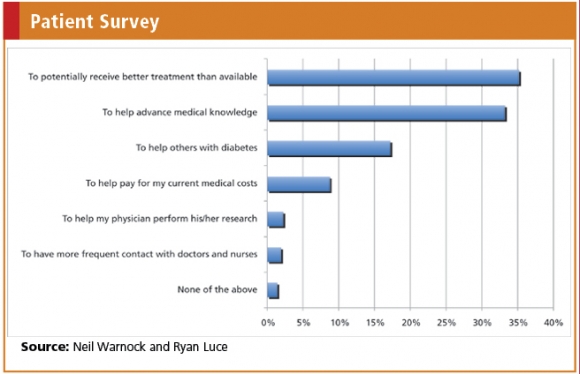 I was able to interview Ryan Luce, about his company’s vision for disrupting the way patients are recruited for clinical trials. You can view a video explaining the Corengi solution and read the full transcript of my interview with Corengi co-founder Ryan Luce below. Please share you comments on the Corengi solution and the difficulty recruiting patients for clinical trials in the comments. 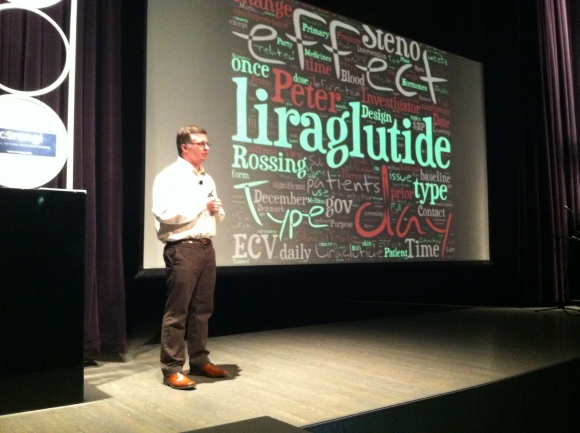 BTE: Can you start off by telling me a little bit about the inspiration for Corengi? What is the vision for the product(s)/service(s) you are building to patients and how are you fundamentally changing the clinical trial process?

Ryan Luce: The biggest challenge for clinical trials, at least the majority of the time, is finding patients to participate. One of the patient verticals where this is especially true is Type 2 diabetes, where the study sponsors simply cannot find the participants they need to complete the research. This shortage of participants both leads to greater costs for conducting a trial, as well as slowing the pace of medical innovation.

We segment the patient community, particularly in chronic conditions, into two separate areas. The smaller segment is those patients actively looking to participate in clinical trials, which is the patient population we started with here at Healthbox. For these patients, there really is not a good way to find clinical trials for which they are qualified.

So you take a condition like Type 2 diabetes, and there are 400 active studies with each study having one, ten, even hundreds of locations, and each of the studies have different criteria.

For example, one study might require you to be on Metformin and not insulin and have been diagnosed at least one year ago. The next study might insist that you ARE on insulin, but that you haven’t been prescribed a certain therapeutic like a GLP1 Agonist. So there are all these criteria around medication and when patients were diagnosed, and so any one patient is likely not qualified for a given study, and even if they are the trial descriptions use language that patients don’t understand such as “GLP1 Agonist”.

We started with that motivated patient population and we created a matching engine so these patients could tell us what drugs they are on, what their most recent blood sugar was, when they were diagnosed, etc, and then take the 400 on-going trials and filter it down to just the ones most appropriate and geographically close.

The other patient population, the larger of the two, is those who are not actively seeking a clinical trial to participate in and we have started to explore ways to potentially engage these people. There are a lot of misconceptions that people have about clinical trials, and we have published research on this in the journal Applied Clinical Trials where we surveyed 300 diabetes patients about the barriers and drivers around clinical trial participation.

Of those, 140 had actually been in a trial, the vast majority of which were incredibly positive about their experience AND would recommend it to others. Most people you approach about clinical trials say, “no no, that’s not for me”, but then when you talk to people who have actually participated in a clinical trial they say, “IT’S GREAT”.

BTE: What are some common misconceptions about clinical trials that you have found among the Type 2 diabetes patient population?

Ryan Luce: Some of the misconceptions that lead people to avoid clinical trials are that people usually assume that all clinical trials are drug related, but the reality is that there is research on diet, exercise, there is surgical research, and then there is a ton of purely observational research. So people that want to make a contribution to medical progress but are unwilling to take any risk at all need to know that there are still trials that would be as simple as having their blood drawn which are desperate for participants. In that sense, it’s pretty easy to make a contribution to medical progress.

There are real misconceptions are about the types of research available. Even within drug-related research, patients assume that they are either placed on an experimental drug or a placebo, and if you think about a typical Type 2 diabetes patient they have all sorts of issues with blood pressure and other symptoms which means they are taking all sorts of different medications and many patients assume those regimens are all discontinued when they enter a trial and that they are then either put on an experimental drug or a placebo.

They actually think there is a 50-percent chance they will end up on nothing, and they have been on nothing before and experienced spikes in their blood sugar, so they immediately disregard trials as not worth the risk. The thing is, that isn’t at all how clinical trial research is designed. Patients remain on their current drug regimens and the trial may then incorporate a new experimental drug or placebo on top that.

We have also had people with type 2 diabetes come to us with concerns about placebos because traditionally a placebo was a sugar pill, which is not necessarily the case anymore. Even if it were the case, it’s not a meaningful amount of sugar, so the fears are unwarranted. What we realized we had to do for this segment of the population was humanize what clinical trials are all about, dispel some of these myths and provide education about the process.

We spent a lot of time at the beginning of the Healthbox program looking at the different ways of finding and engaging patients to participate in clinical trials, such as through electronic medical records. What we found was that we are experiencing such a rapid adoption rate for these EMR systems that there is very little interest in incorporating/integrating these types of patient engagement tools because everyone is squarely focused on driving adoption.

The real need is this humanizing aspect around clinical trials, and that is what we are attempting to solve.