Long gone are the days when video games were simply a source of mindless, pixelated entertainment. Increasingly, we are seeing very useful applications of video games in healthcare.

HopeLabs, a nonprofit organization, has developed a game called Re-Mission that seems to have an extremely beneficial effect for teens and young adults with cancer.

In Re-Mission, patients play as Roxxi, a nanobot who travels through the bodies of patients with different kinds of cancer and battles the disease itself as well as treatment side effects.

To power up the nanobot, players must make her take antiemetics, stool softeners, antibiotics, and feed her healthy food, important components of real-life cancer treatment regimens. All great lessons for kids dealing with incredibly complicated challenges.

It makes sense that having cancer patients assume an active role in battling cancer via the game might translate into increased motivation and sense of power over their disease in real life. In fact, a 2008 randomized controlled trial published in the journal Pediatrics suggested that playing the game improved adherence to treatment regimens and increased self-efficacy and knowledge of disease among cancer patients. 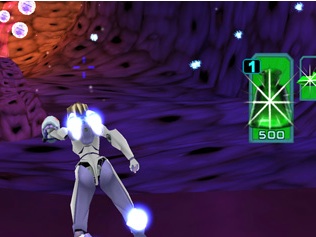 A new study attempts to explain these findings by examining brain activity of patients watching versus actively playing Re-Mission. In the study, 57 participants were randomly assigned to either play the game or watch recorded gameplay. Functional magnetic resonance imaging (fMRI) demonstrated an increased activation of the reward circuits in the brain during active gameplay, but not during observation of the game or at rest.

In the recent press release, co-authors of the article explain the importance of these findings:

“Identifying a direct connection between the stimulation of neural circuits and game play is a key step in unlocking the potential for game-based tools to inspire positive behavior and improve health,” said Brian Knutson, Ph.D., associate professor of psychology and neuroscience at Stanford University.

“Active involvement in video game play sparks positive motivation in a way that watching and hearing information does not,” stated Steve Cole, Ph.D., Vice President of Research and Development at HopeLab, professor of medicine at the University of California, Los Angeles. “All participants in the study received the same information. It was the active participation in gameplay that made the big difference in motivation. This study helps refine our ‘recipe for success’ in harnessing the power of play in the service of health.”

As an active gamer myself, I am excited to see the development of video games for health benefits. Treatment noncompliance and failure to understand a complex disease such as cancer are huge barriers to recovery for patients. Specially developed video games such as Re-Mission are important innovations in healthcare and have huge implications in the engagement and empowerment of patients in the treatment of their disease.

For more information about Re-Mission, visit their official website.