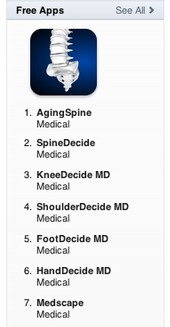 In anticipation of a “major overhaul to the user interface and content”, Orca Health has moved their popular patient education app series “temporarily” to the free section of the iTunes app store. While the details of the overhaul are still being kept under wraps, our friends at Orca  tell us the apps will see a “complete redesign” to utilize more of the iPhone and iPad multi-touch gestures.

Not surprisingly, these apps now dominate the top free apps in the medical section of the iTunes app store (see above image taken today)

We have previously reviewed some of their apps including: Knee Decide, Shoulder Decide as well as interviewing Matt Berry, CEO of Orca MD

In addition to the UI redesign, we are told all apps will eventually follow a “freemium” model originally adopted with ENTDecide and EyeDecide. The goal, according to Orca Health is:

“…to erase as many barriers to downloading the apps as we possibly can. We envision a future where doctors prescribe apps and patients are able to download them on their way home or back to work.”

Using the freemium model, the apps can be more easily downloaded. The anatomy and “Find a Specialist” portions will likely remain free while other modules, such as the disease conditions, may in-app purchases.

We can attest that the folks at Orca Health are very attuned to user feedback so no doubt future changes are coming as they hear from their patient and physician users.