The Health Datapalooza 2012 will showcase will feature the best and brightest applications using data from government and other sources. Innovators will present their technologies and will be judged “American Idol”style by the audience comprised of consumers, health care professionals, and community leaders.

But time is quickly running out to submit your health app to be considered for inclusion in the event, which will be held June 5-6 at the Washington Convention Center. The deadline to submit your app for consideration to be featured in the Forum Showcase is March 30th.

The best-of-the-best apps will be featured on the Forum’s main stage, in breakout sessions, or in an expanded exhibit hall. This year’s forum is featuring apps and tools that have successfully harnessed data and are aimed at three broad audeinces: consumers & patients, providers & payers, public health & communities.

US Federal government CTO Todd Park recently published a guest post at The Health Care Blog in which he extolled multiple pop culture references in an attempt to stir interest among the more youthful developers, whom typically shy away from health care related business due to a perceived risk.

Tim O’Reilly published a brief letter on the upcoming Datapalooza over the weekend at O’Reilly Radar. O’Reilly equates the HDI health care’s version of the National Oceanic and Atmospheric Administration (NOAA), which launches satellites, tracking buoys, and all sorts of other tools for measuring weather patterns, and releases the data to be delivered by commercial companies via television, web applications, and smartphones.

“The idea is to make data vaults of HHS (and other sources) available in electronic, machine-readable, downloadable, easily accessible form, and promote its availability to entrepreneurs and innovators (via meetups, challenges, and codeathons) who can turn it into all kinds of applications and services that can improve health and create jobs at the same time.”

Jody Ranck, health technology analyst at Giga.Om, made the salient point in his own post over the weekend in which he held the Health Data Initiative up as a model for the role government should/must play to stimulate innovation proactively.

Data is available for developers at healthdata.gov, and details about the Dept of Health and Human Services vision for the Health Data Initiative can be found here. 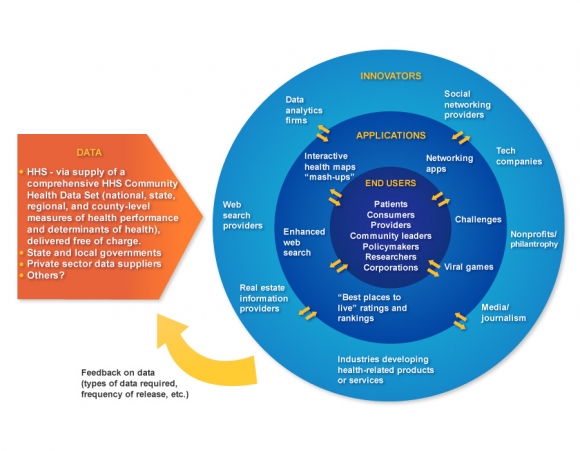 Successful application of the data should be evidenced in the same health measures surfaced via the data set.

Not an app developer? You can still apply to be a judge of the American Data Palooza Idol.