A recent report by BCC Research has made some projections about telehealth that should catch the eye of physicians and allied health professionals.

Telehealth, as defined by the Department of Health and Human Services, is the use of electronic information and telecommunications technologies to support long-distance clinical health care, patient and professional health-related education, public health and health administration.

While still an emerging market, with the advent of reliable and cheap video conferencing technologies the global  telemedicine market grew from $9.8 billion in 2010 to $11.6 billion in 2011 and will almost triple to $27.3 billion in 2016. That means that healthcare professionals can expect that telehealth will become an increasing part of their practice.

Telehealth technologies include videoconferencing, the internet, store-and-forward imaging, streaming media, and terrestrial and wireless communications. As the technologies have become cheaper and more accessible, their application in healthcare on a large scale is actually realistic. As a result, BCC projects an annual growth rate of 18.6% for the industry. According to a recent article in Information Week,

“The report, Global Markets for Telemedicine Technologies, is based on interviews with manufacturers and users of telemedicine technologies and services, as well as from reviews of secondary sources such as company literature, conference proceedings, and related government data. “ 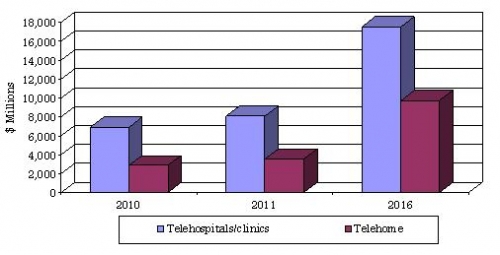 The report also goes makes some interesting demarcations and breaks down the telehealth market further into separate segments including  into telehospital/clinic and telehome markets, which also generates some interesting observations.

Another approach taken by BCC was to break down the telehealth market by technology segments – hardware, software, telecom, network) and service segments.

In a recent guest post, Dr. Robert Smith highlighted what this all means, discussing how telehealth can have a positive impact using fairly low-cost means. These projections of fairly rapid market growth suggest that this mode of care delivery is one that healthcare professionals will become increasingly familiar with in their day-to-day practice.