ChartLogic, a provider of electronic health record (EHR) solutions to hospitals, recently announced at HIMSS 2012, their new Stella voice recognition overlay which is compatible with all leading EHR systems.

This new overlay offering from ChartLogic works with iPads, iPhones as well as various other mobile devices and platforms.

The iMedicalApps team has previously reported on dictation software for small practices as well as practices with EHR systems, including the popular Dragon Medical software. Stella, though, adds new features which are compatible with numerous hospital EHRs and may be a viable alternative for many clinicians. Stella gives doctors the ability to use their existing devices at work to connect to hospital EHR systems without the need to replace or reconfigure the current system.

“Utilizing the same type of cloud-based natural language processing (NLP) employed in Apple’s Siri, Stella can greatly speed workflow for physicians by enabling them to use iPads, iPhones and other mobile devices with their hospital’s EHR system.” 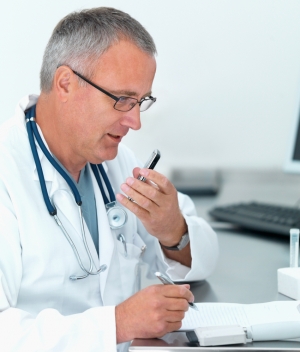 Physicians are able to speak in a natural tone to Stella, which is able to take dictation, recognizing complicated medical terminology. Brad Melis, founder and executive vice president of ChartLogic concurs.

“Stella leverages the speed and ease-of-use of voice dictation, which is preferred by many physicians. Stella allows physicians to dictate, type, or touch (iPad) to review and create clinical documentation. While including a dictation option, it goes much further, using NLP to understand medical terminology and voice commands.”

“For example, Stella will facilitate documenting and transmitting clinical care documents because it is the first cloud-based EHR application that natively incorporates the new CDA (common document architecture) Level 2 standard. This helps meet the proposed meaningful use requirement that EHRs have the capability of producing human readable (and computable) documents.”

Indeed, CDA is a document markup standard that outlines the specific structure and semantics of a clinical document (such as a discharge summary or progress note) for the purpose of exchange. A CDA document is a defined and complete information object that can include text, images, sounds, and other multimedia content.