Can kids improve their own health? Results from a study of smartphone use in juvenile diabetes

[This is the second of a two part series based on Dr. Cafazzo’s research recently presented at the 2011 Medicine 2.0 Congress. Part one is published here. Submissions for the iMedicalApps & Medicine 2.0 mHealth Research Award are being accepted until March 7.]

As discussed in part 1, in our development of a next-generation remote patient monitoring system, we elected to develop a chronic disease remote monitoring system based on a smartphone that would allow the automatic wireless transfer of measurements from medical devices (e.g. weight scales, blood pressure monitors, glucometers, etc.).

There is little compromise in electing to use mobile phones over purpose-built hardware, as mobile phones typically have greater computational power than these platforms, as well as built-in broadband Internet access. This gives us the ability to scale the system to reach many more patients than would normally be possible on systems based on purpose-built hardware that cost significantly more to produce.

Although we take the design and development of this smartphone platform very seriously, we aren’t interested in creating gadgets. As a research hospital, we take the opportunity cost of building such a system seriously. We need real tangible results. Hence, we spend more time and money evaluating the technologies that we develop than on building them. Our findings feed the next iteration of the technology. This is an example of evidence-based design. Consider it user-centered design on steroids.

Read below to see how this worked when we targeted the hardest group of all: kids. Specifically, adolescent kids.

Submissions for the iMedicalApps & Medicine 2.0 mHealth Research Award are being accepted until March 7. Details are here

These are the kids that are learning independence, that are leaving the house more often, that aren’t eating right, or listening to their nagging parents. Now imagine them with a chronic illness such as diabetes. These kids are notorious for taking fewer and fewer blood glucose readings per day, eating improperly, and generally having a defiant streak in them.

So how is our system going to help these kids? Well it’s not. Reminders and phone calls are just automated versions of their nagging parents. We needed to start again. 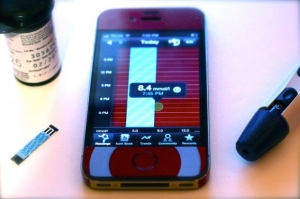 And so we did. This time with the iPhone, we created “bant”, which added a number of features to our past platform that we felt would resonate and “stick” to the kids. First, it had to be fast. These kids didn’t want to spend a lot of time fiddling with their blood glucose meter and the phone especially at school when someone could be watching. It had to be fun. We included a reward program that would give them experience points (XP!) for every reading they took. (Abstract 673 in program book)

They would get a times two multiplier (x2!) when they took consecutive readings (like that elusive lunch reading at school). Once they leveled up, the app gave them a reward in the only way we thought possible on the iPhone – through iTunes. They were able to buy apps and music with the points they redeemed.

The rewards were quite the hit. Over a three-month period they increased their frequency of measurement by 49.5%. That’s on average an extra reading per day. This was only a pilot of twenty kids, but it was a good start. We learned lots about the mini social community that we integrated into bant too. Kids were able to micro-blog in a private twitter-like community within the app. This engagement was a first for some kids. Many of them have never met another kid with type I diabetes.

The purpose of this was to keep them engaged, to provide that “stickiness” that would keep them returning to bant, and not abandon it for Angry Birds instead (although, Angry Birds was a very popular redeemed reward!).

Next up for bant – tying rewards to action around blood glucose management directly. We would like to show an actual improvement in A1C, otherwise what’s the point? Of course, an RCT is planned to show if this, in fact, is achievable.

Assistant Professor, Institute of Biomaterials and Biomedical Engineering and the Department of Health Policy, Management and Evaluation, Faculty of Medicine, University of Toronto

[Have you published mobile health research that you think would be of interest to iMedicalApps readers ? Drop us a line to get it published on this site ]