Pedometers and internet based programs have proven to be beneficial for increasing activity levels in obese and overweight individuals.

To improve upon this concept, researchers in Boston performed a study to see if the addition of a virtual coach would be even more effective than the use of a pedometer and website alone.

A total of 70 participants were recruited from the Boston metropolitan area and assigned to one of two study groups. One group was asked to wear a pedometer and track their step count online.

The other group was asked to do the same, but also met with an online virtual coach that set goals and provided personalized feedback. The virtual coach was computer animated and run from software installed on theresearch participant’s home computer. The statements of the virtual coach were evidence based and developed by an interdisciplinary team using physicians, computer scientists, and exercise trainers.

The average age of the participants was 42 and the majority were female (84%), white (76%), and college educated (97%).  Out of the 70 who participated, 62 completed the study.  Those who worked with the virtual coach maintained their step counts, while the activity level declined in those who did not. 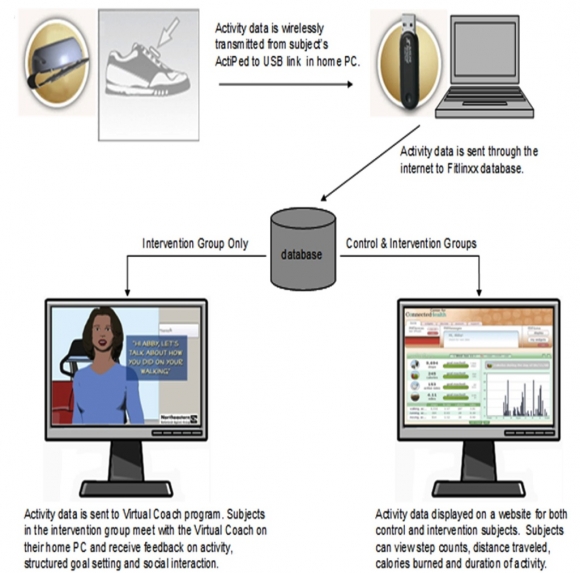 According to the researchers

There was no significant difference in weight loss among both groups.

The study showed those who worked with the virtual coach were able to maintain their levels of activity. However, there was a decline of activity in those who only used the pedometer and web-based feedback alone.  It has been suggested that further studies should examine the long-term benefits of virtual coaching and how this concept can be applied in other mediums.