iPad Stylus Pen Review: An Updated Comparison of the best stylus for the iPad

Our last comparison review of iPad styluses turned out to be quite popular, but since then, the second generation of iPad has arrived, and other companies have taken notice and thrown their hat into the stylus ring.

Summing up the original comparison, the consensus of top performers were those with rubber-domed tips (including the Boxwave Stylus, Griffin Stylus, and AluPen).

They were largely similar in performance, but with different shaft thicknesses and weights. The big downsides to these styluses were their large blunt rubber tips, as the iPad screen is unable to recognize fine-tip styli.

In late Spring, Wacom, the industry standard when it comes to digital pens and styluses, threw their hat into the ring by announcing the Bamboo Stylus for iPad, which featured a rubber tip that is 25% thinner than the traditional styluses.

Then, over the summer, young design company Adonit introduced the Adonit Jot Pro via the crowdfunding website Kickstarter.com. The Jot implements a revolutionary new flexible transparent disc that closely mimics a natural ball-point tip. How do these new products stack up against the competition?

This review will aim to focus on analyzing how the Wacom Bamboo Stylus and Adonit Jot Pro compete against what has become the standard rubber-domed stylus for iPad. We selected the previous comparison AluPen and Boxwave Styra to represent the more traditional rubber-domed styluses. Please see our previous review for thoughts on the Griffin Stylus, Dagi Stylus, and Pogo Sketch.

Our first comparison study was a Natural Writing Test, where I tried to write as naturally (in speed and pressure) as I would write with a regular pen. Notice that the Jot Pen allowed for the thinnest writing, while offering arguably the highest quality.

The second test is the Smallest Writing Test, where I tried to write as small as I could with each stylus. As you can see, most of the styluses (except the Adonit Jot) merged a lot of strokes together, or missed strokes completely. Also, it’s worth noting that while the end-results of the rubber tipped styluses don’t look that much different than the Adonit Jot, the black rubber tip often obscures your vision from seeing your strokes as you write. 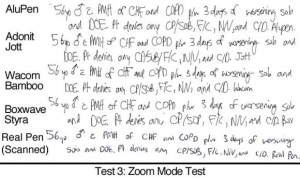 The last test is the Zoom Mode Test, where I utilized a notepad app (Noteshelf) to create the cleanest sample of writing that I could. Zoom Mode is a feature in many notepad apps where you write in a box at the bottom of the screen that is a zoomed in view of the actual writing area on a page.

Therefore, you can write largely and clearly, and when scaled back down, the handwriting comes out more legible and tightly spaced. While the end result is clean and impressive, the writing experience is much different than the traditional approach of using paper and pen.