Gympact takes a different approach to healthy incentives: get fit or get fined

GymPact (@gympact; tumblog), which was just chosen to be a member of the new TechStars Boston class of startups, uses financial incentives and location-based services to incentivize individuals to meet the minimum weekly workout goals they set for themselves.

The iOS app was developed by a pair of Harvard students who were inspired by a behavioral economics class which posed the question, “if you were fined $5 every time you blew off your daily gym time do you think you would be more likely to go every day?”

“Behavioral economics show that if you tie cash incentives to things that are concrete and easy to achieve like getting to the gym, its very effective,” said Yifan Zhang, (who co-founded GymPact with Geoff Oberhofer), in an interview with the NYTimes. “People don’t like losing money, it’s one of the strongest motivators, much more than winning money.”

The company doesn’t mess around either, requiring anyone who expects to call in sick and get out of their commitment after finalizing a weekly plan to get a medical excuse form filled out by a physician.

Users who successfully meet their goals each week are awarded their share of the fines paid by the users who did not meet their goals. Earnings are collected based on how many days each user commits to go per week, so if you signed up for three days you are allotted “three portions” of the winnings. As of the time of the NYTimes post, users were collecting approximately 50 cents per visit, but it varies. Once the app scales up, the GymPact team expects payout rates to stabilize between 50 cents and $1 per visit. Money earned accumulates in a PayPal account and users can draw upon that account once it hits $10, with GymPact taking a $1 fee for each withdrawal.

Currently the app is only available for the iPhone, but it will soon be available via Android as well as a HTML5 web app. One of the most interesting things about GymPact is the total lack of any health or fitness information. Iit doesn’t provide the user with any useful fitness information, it is simply an incentive platform and the principle could really be applied to anything. I could easily imagine future versions of the app that could award students that never cut class and fines those who are constantly truant.

The concept is brilliant and it will be interesting to see how they can scale the platform. A good strategy may be to partner with fitness app developers that already have a large base of dedicated users, such as Skimble (@skimble), which recently passed the 2 million user mark and is currently a featured app in the iOS App Store. 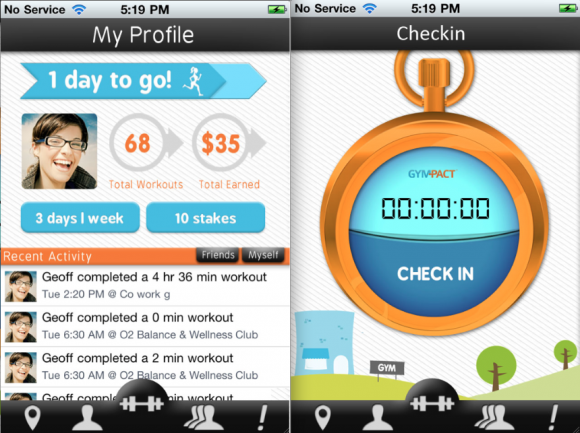 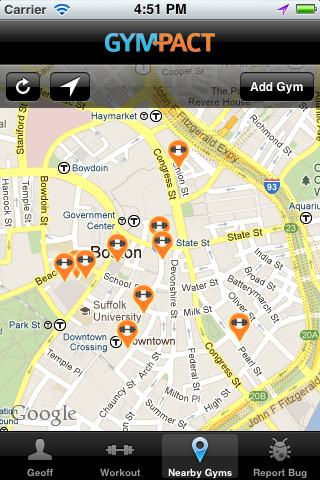 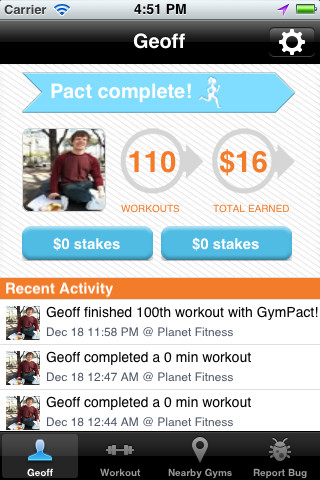