Over a year ago, we reported on a suite of cloud based mobile and desktop software by Envisionier that was bringing endoscopy video capture into the modern era.

In that article, we showed how the eGoWorks desktop app allows physicians to edit captured video, add text to make a report, and share the study securely with colleagues and patients, all from a browser based app.

A companion iPhone app allowed review of the video and stills from anywhere, pulling data from the eGoWorks server.

This was a major advance from the current state where endoscopy (including arthroscopy & laparascopy) is viewed live on video monitors but the data is lost as soon as the equipment is unplugged from the wall. By moving the video data to the cloud, Envisionier opened up new avenues for storage, collaboration and analysis of digital patient data.

Now, Envisionier is taking another leap with the introduction of its Endoscync wireless video transmitter and companion iPad app. Together, these allow any endoscope to send its video data wirelessly to a nearby iPad, which thus replaces the traditional video monitor as well as functioning as a simple report generator.

Along with their handheld EndoGo HD camera, this means that an endoscopy suite can now reside in a small briefcase instead of occupying a corner of a room. 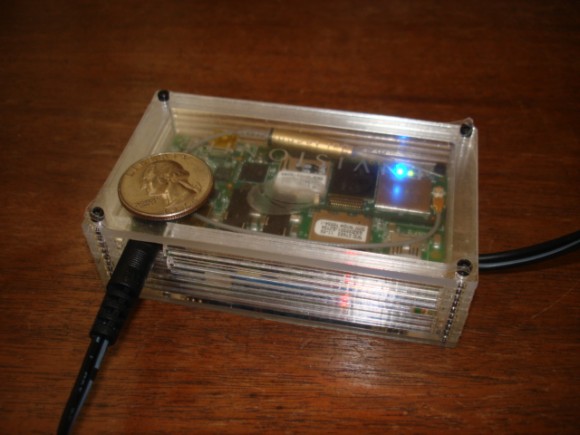 The Endosync module is currently in beta form. iMedicalApps had exclusive access to a test version as well as the accompanying eGoPad iPad app. The Endosync module accepts “component” video input from any source and is not exclusive to the EndoGO camera. With a simple adapter, it can be plugged into any commercial video tower, such as those made by Olympus or Storz. Aside from plugging in a power source (or battery pack), that is the only set up required for the Endosync module.

The capture resolution is either standard DV (320×240) or HD (720×480), which the release model will select automatically. The EndoGo HD camera is also capable of DVI (digital video) output, however the EndoSync currently only accepts analog component video input. 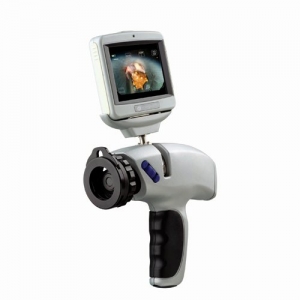 Once turned on, the Endosync creates an encrypted (WPA) WiFi network, which the user joins from the iPad. Just launch the eGoPad app and start capturing video and stills. David Guy, CEO of Envisionier, explained that by having the EndoSync create its own WiFi network, it avoids having to rely on a hospital or clinic wireless network. The Endosync is able to multicast the video output, so the images can be viewed simultaneously on more than one iPhone or iPad, opening up new possibilities for teaching or collaboration.

We found that there was no lag or choppiness in the video display on the iPad. Once viewing the video stream, a simple press of a button starts the capture. Another button allows a still image to be stored. 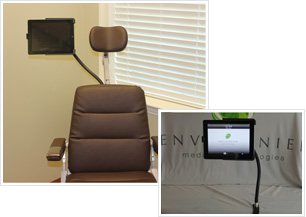 Envisionier also provides a flexible iPad holder that can be clamped to a table top, exam chair or operating room mount, allowing for single hand use of the iPad. In typical use, the endoscope itself is the only component that is sterilized since it is the only part in contact with the patient. 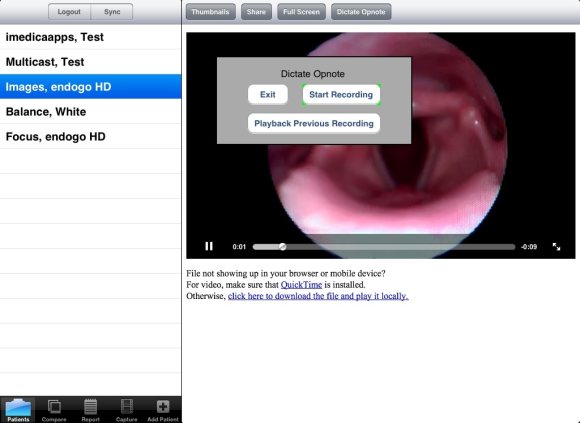 In addition to capturing video, the eGoPad app also allows for dictation directly into the iPad. This can even be activated by voice by saying “start recording” to the iPad, allowing the operator’s hands to remain on the endoscope. In our trial, this did not seem to initiate reliably, although it would be a genuinely useful feature and hopefully will be improved. Envsionier is also working on direct transmission of the voice recording to on-line transcription companies so that text transcripts are automatically generated. For now, only the audio is stored.

Reports can be generated directly on the iPad from any captured stills. A separate screen allows composition of up to four stills per page and the ability to type directly below each image. Your letterhead and standard header can be included and a report to the referring physician can be totally completed directly on the iPad, another time saver. 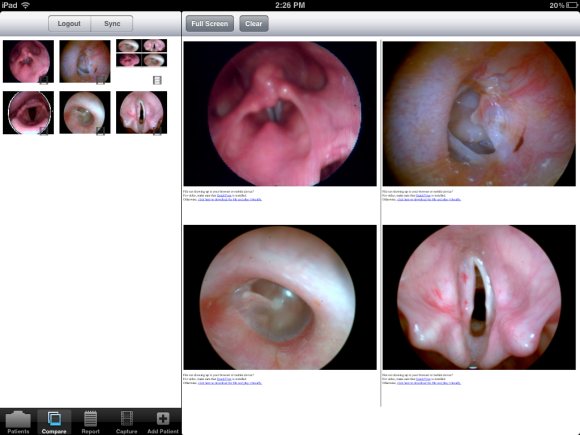 Once the acquisition is complete, the eGoPad app can be switched to online mode (via 3G or local WiFi) to connect to the eGoWorks server. By pressing “sync”, the video and other data from this session is pushed up to the cloud and all previous stored endoscopy data becomes also becomes available on the iPad. This opens up the prospect of even more interesting functionality.

One that is immediately available is a “compare” feature. Up to four recent or old stills can be selected and displayed simultaneously for the user to see. In patients who have undergone serial endoscopy, such as following up colonic polyps or esophageal erosions, this alone is a huge advance. This type of longitudinal comparison is simply not possible with conventional video endoscopy.

The potential here for future innovations is even greater. Image analysis software is already standard in breast mammography. Here is a perfect opportunity to include tools on the iPad to compare size, shape and color of imaging findings and supplement the  physician’s diagnostic impression. According to David Guy, these are some of the same ideas they have considered. However, introducing these decision support tools would likely change the classification of the software vis the FDA, complicating its clearance, and will likely be deferred to future versions. 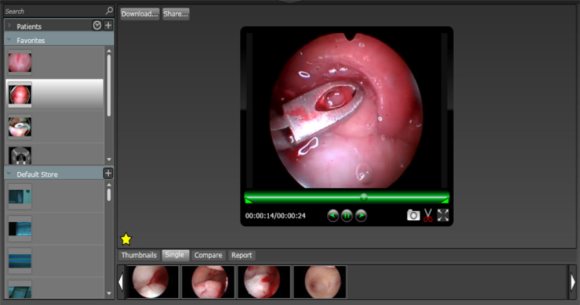 Once the iPad is synced, then the video and reports are also available using the eGoWorks application which works in any desktop browser. Since it currently uses the Microsoft Silverlight plugin, it cannot be accessed on a mobile device, although the plugin is available for Windows and Mac.

Our previous review already covered many of the important features of the web application. These include the ability to add demographic characteristics to studies and to generate reports. There is a HIPAA-compliant method for sharing of endoscopic video and images with colleagues or even patients. The “compare” feature is also available online but here also allows video to be compared. Images and videos can be flagged as favorites, in order to collect examples for teaching. Images can be adjusted for sharpness, hue, saturation, brightness, and color offset. Video editing capabilities include trimming, extracting still images from video.

To summarize, Envisionier has built a near complete endoscopy ecosystem, including a hand held HD camera, a desktop browser based app with server back-end and, now, the Endosync – a Wi-Fi hub that accepts video input and transmits it wirelessly to any nearby iPads or iPhones. By storing the endoscopy video and image data in the cloud, Envisionier has made patients’ data mobile and unshackled it from the endoscopy suite. This means that no matter where the physician is –  office, clinic or home –  she has access to her endoscopy data.

In addition, the system is  ready to integrate easily into any electronic health record (EHR). Since the video is left on the eGoWorks server, only a link needs to be stored in the patient’s record. Video storage capability does not have to be built onto an existing EHR. In fact, Envisionier eGoWorks is already an approved vendor for the Veterans Administration (VA) and Vista Imaging systems, one of the world’s largest EHR installations.

Furthermore, this technique of storing the endoscopy data in the cloud and exporting only the reference would also work for integration with personal health records (PHRs). As more EHRs implement interfaces to PHRs, this opens up more avenues for machine to machine communication. Envisionier is hoping to take advantage of this and is planning an announcement soon regarding integration with a major PHR vendor. According to David Guy,

“One of the pain points with EHRs is moving data that is unassociated into the patient record. We think there is growth area in making something agnostic that allows any video tower system to become an integrated system.”

The iPad app, as befits a pre-release version, has several rough edges. Some of the buttons were awkwardly placed. Indicators marking the progress of syncing were not always displayed. Some typical iOS conventions regarding video and image manipulation were not yet implemented. Yet, even needing this extra polish, the promise of the platform is clearly evident.

In terms of a business model, the plan is to provide this as a software as a service (SAAS) model. The backend eGoWorks software will be available for free up to a certain amount of storage after which there will be a charge. Pricing of the iPad app is not yet determined.

Envisionier is starting to deliver on the promise of tele-endoscopy – where image capture and analysis are separated. Mid-level providers can perform endoscopy procedures, even in remote areas, and experts can review and analyze the video and images in another location. As David Guy said:

Our mantra is move data rather than patients.”

This is one of the promises of mobile medical technology – that cost and complexity go down while access to health care improves. We will be looking forward to seeing EndoSync on the market and hearing about how practitioners are actually using it to help patients.

[If you have developed a wireless health device and want our readers to know about it, drop us a line.]