Harrison’s Principles of Internal Medicine is one of the most highly regarded and widely read medical textbooks around.

Because of its popularity, this book has been transformed into several digital versions. One of the most widely used is a web-based version powered by AccessMedicine, a web portal from McGraw-Hill.

Many medical schools buy AccessMedicine for their students, so this is the form that students are most familiar with. But there are some new entrants to the arena that students should take note of. Recently, Inkling – an excellent textbook reader for iPad – unveiled its own version of Harrison’s, with all the interactive features that we’ve come to expect from Inkling’s titles.

In this review, we will compare and contrast the online AccessMedicine (AM) version verse the dedicated app version of the textbook on the Inkling platform.

The first distinction between the AM (Access Medicine) and Inkling versions is the platforms:

Harrison’s on AM is web-based, thus one has to have an internet connection to retrieve the content.

Inkling, on the other hand, downloads the text to the iPad itself, allowing offline viewing. 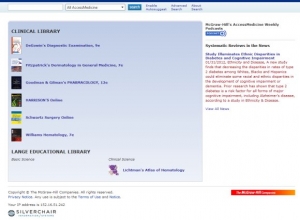 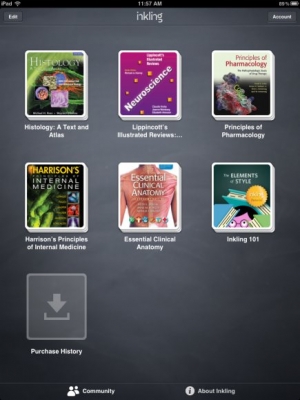 The layout on AM is a series of web pages organized through hyperlinks. Significantly, AM does not allow viewing of full chapters in their entirety. Each chapter is divided into sections, and one can only view one section at a time. This restriction was put in place for all AM titles in order to prevent piracy. Unfortunately, it makes using the material on AM more cumbersome.

Inkling, on the other hand, allows users to view the entire chapter at once, allowing seamless scrolling from beginning to end. 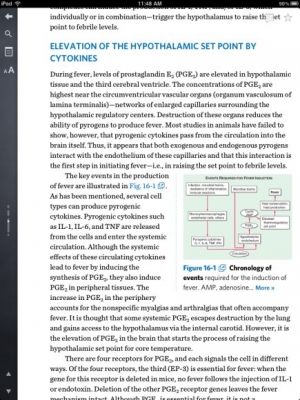 AM’s version of Harrison’s integrates thumbnails of figures within the text that need to be expanded in a separate pop-up window in order to view them.

Inkling has nearly full size images integrated in the text that can be expanded but don’t necessarily need to be. The same difference is seen with tables as well.