The best iPad note taking apps to use with stylus pens 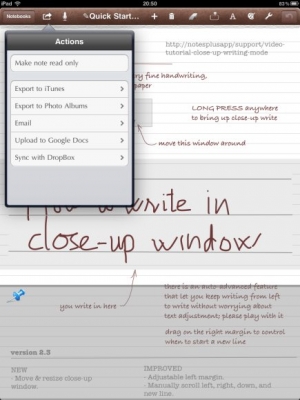 The last time we reviewed a number of stylus iPad apps, we concluded that Notes Plus was the best due to its advanced feature set. It will be interesting to see if it can remain the best given the impressive updates to its competitors.
The core of any note-taking app is its ability to handle a stylus input and Notes Plus does not disappoint. It offers an adjustable palm rest as well as a movable zoom box which has a well implemented auto-advance feature. In addition there are buttons on the input pane which allow you to quickly undo mistakes and move the ‘zoom’ box (akin to pressing return on a keyboard). Notes Plus also contains an advanced shape detection algorithm which automatically recognizes basic shapes such as triangles, squares and circles. This can be used to quickly highlight key topics. Another useful feature is the ability to select notes on a page by circling them with your finger. This is one of the quickest ways to move and adjust notes on a page.

There is a wide range of annotation options available that include highlighting, shapes and multiple typed text fonts. Notes Plus’ unique selling point though is the ability to record audio using the internal microphone whilst annotating notes. In practice this worked quite well and was useful when information could not be written down quickly enough.

Notes Plus have taken on board a number of our recommendations and updated accordingly so now it is easily possible to undo from the zoom box, quickly switch margin to the right side for list writing. The main positive update is Dropbox support. Now it is possible to upload notebooks as PDFs to Dropbox where they will reside in a Notes Plus folder created in your main Dropbox folder. 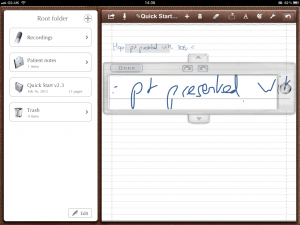 Notes Plus is a very strong contender due to its advanced feature set, gesture recognition, well-implemented zoom function, audio recording and Dropbox/Google Docs integration. The only flaw is the challenges associated with importing files (such as PDFs) to mark up. The lack of a template feature is a sad omission in an otherwise impressive app.

[UPDATE: Notes Plus now has the ability to import PDFs from Dropbox] 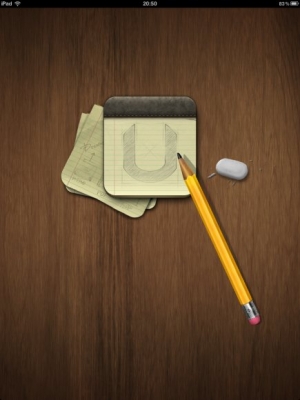 UPad cites its handwriting engine as one of its strong points and this is consistent with what I found. Whilst it was an exaggeration to say it was close to actual paper, I felt that writing using UPad was an excellent experience. The zoom function worked effectively although I did find myself occasionally writing quicker than it could cope with in terms of the auto advance. The lack of an undo button on the zoom box itself meant that your hand is continually moving all over the iPad back to the top menu bar. There was a palm rest area which meant writing on the iPad was substantially easier. UPad offers a decent range of annotation options including a particularly clever and effective erase ability-literally scribbling things out. The range of colours and pen options offered is one of the most complete which many will find useful as well as the ability to add in text notes directly. Inserting basic shapes such as squares, circles and lines is assisted by the use of a grid function which the shapes snap too. It was a shame that the range of shapes was so limited.

The ability to add images into the notebook was welcomed as was the ability to manipulate pages in each notebook. There were a number of robust export features such as the common PDF and Email as well as social media such as Twitter and Facebook. PDFs could be uploaded to Dropbox or Google Docs or other apps which can open PDFs. There were a number of document management features such as folder creation, move/copy/delete as well as a backup/restore option. It was not possible to export the raw note files over Dropbox-only through iTunes. Unfortunately one significant limitation of UPad was the inability to import PDFs from apps such as GoodReader/Dropbox. This significantly limits its overall function as it would be difficult to annotate lectures and other documents directly. 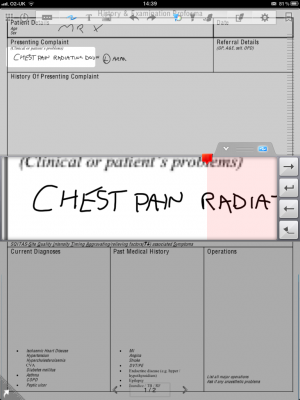 UPad combines a number of decent features into a well-rounded package. Whilst it lacks some of the finesse and import features found in other apps, it is nonetheless a decent note-taking app with a range of uses which may appeal to certain users. 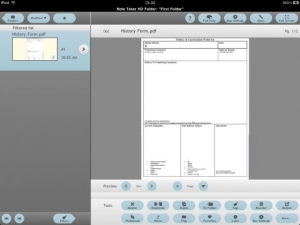 Note Taker HD was extremely similar to Notes Plus in functionality when we last reviewed stylus apps. However since then it has been updated significantly and has gained a strong user base. It is straightforward to import PDFs to Note Taker HD for annotation via other apps such as Dropbox, Mail etc or iTunes. Once a PDF has been added, it is possible to organize and manage them using a combination of folders and there is an advanced range of file management features such as rename, tags, duplication and the ability to attach two PDFs together ‘Staple’. The search and filtering options are robust and allow the user to quickly locate and manage a large number of documents. The template folder maintains regularly used PDFs which can be annotated such as a patient history and examination form.

Note Taker HD allows you to export files either by email or other apps on the iPad. For some reason, Dropbox is omitted from this list however, PDF Expert, our recommended PDF Management app is there which can be used as an in-between to link Note Taker HD to your Dropbox account.

The actual note-taking functionality of Note Taker HD is just as feature rich and advanced as its document management properties. The zoom function is well implemented and making notes is straightforward. Options on the zoom box include an ability to quickly change the zoom scale, undo, return and jump to the right margin. The auto advance feature was not as well implemented as in Notes Plus but was still more than adequate for making notes quickly. There are a multitude of annotation options that include different pen thicknesses, opacity, highlighting. The adjustable wrist guard feature moves as you move your wrist rather than manually. This is useful although it didn’t always work completely and it was not always clear exactly where it is as it is quite subtle (small green dot on left hand side of page). Overall the writing function of Note Taker HD was very impressive.

Where Note Taker HD really stands out is the vast array of customizable shapes and additional options. It is possible to add images into documents as well as text boxes. The font type and size are all easily adjustable to fit the given situation. There are over 60 customizable shapes that allow you to build complex diagrams such as flowcharts, graphs, tables, calendars and more. It is certainly possible to create professional notes using this tool.

When Note Taker HD is first installed, it can be confusing. The wide range of functions and options available can seem overwhelming however this is due to the fact that it is a powerful note-taking tool. Once the basics are mastered then you will have masterful control over all aspects of your note-taking and as result can make advanced documents quickly and easily. 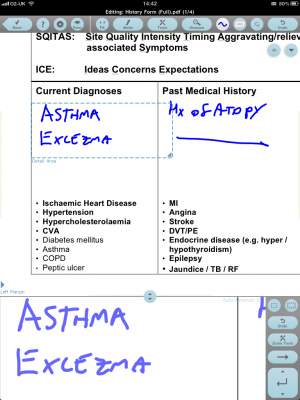 Note Taker HD offers one of the most complete packages for a note-taking app combining PDF management with a fully functional multi-feature annotation package.