HealthSpot (@health_spot) is set to launch its Care4 Station in the first quarter of 2012 in pharmacies, grocery stores and employer sites in an attempt to become the “ATM of health care”.

“We have spent a lot of time into making sure our consumer experience is just over the top,” said CEO Steve Cashman in an interview with MedCity. Cashman describes the company’s mission to create the “highest quality, most efficient healthcare appointment”.

Appointments on the Care4 Station will cost between $59-$69 when launched to the public, which is very competitive with current rates for retail clinics found at pharmacies around the country.

The Care4 Station is currently undergoing a pilot study with primary care provider Central Ohio Primary Care, and CEO Cashman says the company will have several “major announcements” to make during the early months of 2012. The company plans to focus on expanding within Ohio initially before launching in other states nationwide later this year.

Cashman argues the HealthSpot Care4 Station offers a better experience than traditional retail clinics because patients will have appointments with physicians instead of nurses, as well as an enhanced continuum of care by allowing a patient to visit with the same doctor each appointment. 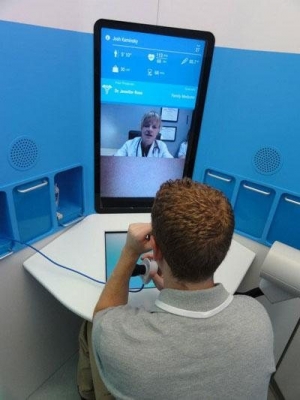 HealthSpot is actively marketing the kiosks to patients, physicians and pharmacies and just last month the company announced it has entered into an exclusive strategic partnership with Mission Essential Personnel LLC of Columbus, OH to market its Care4 Station to potential military and government clients globally.

According to MedCity, HealthSpot has raised $6 million in venture capital to date, including investment from Columbus-based pharmaceutical distributor Cardinal Health. The company also recently received a $50,000 grant from the State of Ohio, as well as a six-year tax credit valued at $424,000, to support its local expansion.

It is unclear from the information provided on the company’s website what the business incentive is for physicians and pharmacies to join the HealthSpot network, but it seems reasonable to assume revenues will be shared with both physicians and pharmacies. As far as design and user experience goes, the images of the Care4 Station are very impressive and I am eager to see them start popping up in Walgreens and CVS pharmacies around the country soon.

The video below shows the Care4 Station in action.