For Apple fans, MacPractice has been a popular practice management and clinical electronic medical record software for Apple computers.  They often partner with Apple for workshops geared towards medical professionals — as one of our physician editors witnessed while at his local Apple Store.

The iMedicalApps team has previously reported on the MacPractice software and we lamented that there wasn’t a native iPad solution for the software.

At that time, there was a workaround that allowed clinicians to login from an iPad to their Apple computer and view the MacPractice software remotely. Obviously, this isn’t an ideal situation.

That has changed with the upcoming release of Clipboard, a native iPad application that works seamlessly with the desktop software. MacPractice Clipboard streamlines the registration process, saves paper and staff time, and also reduces risk of data-entry errors due to illegible handwriting.

MacPractice’s CEO Mark Hollis explains why the app was created.

“In response to many requests from doctors’ offices to use the iPad for patient registration, we are announcing new Clipboard Apps for the iPad that work in conjunction with MacPractice MD, DDS, DC and 20/20 v. 4.1 desktop practice management and clinical software.”

While doctor’s have frequently requested a native MacPractice app, the task of creating the app has been an interesting challenge for the company. Traditionally, desktop software is designed to take full advantage of the size of a typical computer monitor. With the relative small screen on the iPad, the challenge was designing an app that still provided a quality experience to the user, while not sacrificing any of the functionality of the software. 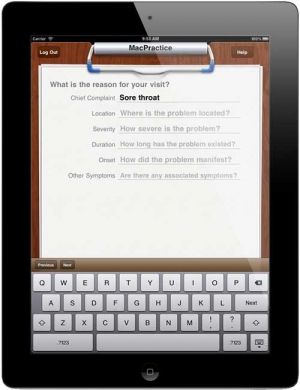 “Another obstacle to implementing iPad apps as quickly as doctors can use them is simply all of the various security and privacy protocols that MacPractice needs to follow. Patient and medical information is obviously very sensitive, and there are a whole host of guidelines and standards, required by law in many cases, that MacPractice needs to follow to make sure its apps are certified and can be used by medical professionals.”

“Hollis says that most of the issue there is that MacPractice has to build in those standards by itself — Apple doesn’t have an official part of the iOS API, for example, designed to deal with medical certification. “It would be helpful,” says Hollis, if Apple did provide some official code to help deal with those issues. But for now, MacPractice has to make sure its own apps are valid, and that takes time and effort, obviously.”

Currently, the Clipboard app is in beta version. It will be released for MacPractice users soon. We will keep you updated on the status of this app and future developments from MacPractice.