Nike has announced a new wrist-worn tracking device called the Nike+ Fuelband (@nikefuel) under the slogan “Life is a sport. Make it count”.

The Fuelband uses oxygen kinetics to track and differentiate between different types of physical activity such as break dancing. Users’ activity level is presented as a “fuel” score. Each day individuals can set a target for total activity and as the day progresses the band gives them feedback on whether or not they are on track to meet that target.

The Fuelband uses an embedded 3D accelerometer to distinguish between different activities as well as two arrays of LEDs to provide the user real-time information. The first array is a horizontal band that lights up as the day progresses from “red” to “green” as the daily activity goal is approach and achieved.

The wristband pairs wireless via Bluetooth with iOS devices (Android app is in the pipeline) and can also be synced with a PC using a USB connection. 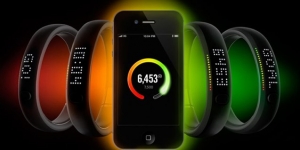 The band itself seems to be very stylish and could potentially catch on, but it could be potentially cost prohibitive at $149. Competition includes the Jawbone UP and Strive, both of which are priced at $99.

Nike Fuelband is already sold out on the company’s website, but it will not ship until February 22. Check out the promotional videos below from Nike’s YouTube channel.

(Thanks to @seandotmurphy for the tip)