The much-hyped and eagerly anticipated Jawbone UP wrist-worn personal health tracker device has proven to be a total failure by almost all accounts. It has been less than two-months since the initial launch of the device and already the company has offered a full refund to any unsatisfied customers.

I have read mixed reviews of the UP device, but by far the most comprehensive comes from our friends over at Engadget. The reviewers at Engadget make it clear that while the device is very well designed with several cool features, it is also prone to total failure, or “bricking” in techie jargon, and the company seems to have little to no idea why exactly.

I found a number of the UP features to indicate the company probably rushed the device to market in hopes of beating competitors to win loyal users. For a company like Jawbone, which apparently makes some of the best Bluetooth powered devices on the market, to make a personal tracking device that requires users to plug it in to sync the data collected makes little sense.

Also, the UP wristband is useless without an iOS device as it lacks a web-based portal, another odd decision which further reinforces the perception that the UP was rushed to market with little consideration for efficacy and usability.

iMedicalApps reported in mid-November that the UP would be soon launching an Android compatible device and app, but to date these have yet to be launched as the company seems to have become preoccupied with solving the buggy iOS version before launching on other platforms.

Hopefully the company won’t have to dump too much of that capital into refunding customers so they have a little bit left over to design a device that actually works. 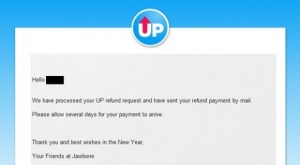