Harrison’s Principles of Internal Medicine is regarded as one of the premier textbooks for physicians through to medical students.

Primarily aimed at internists, it is accessible to medical professionals at all levels with its fundamental clinical medicine coupled with an explanation of underlying pathophysiology. Now in its 18th edition, it is without doubt one of the most recognizable and useful resources to practicing physicians today.

iMedicalApps has previously reviewed Harrison’s Manual of Internal Medicine for the iPhone here but today we take an in-depth look at the full Principles of Internal Medicine for iPad as it has now arrived via the Inkling platform. Inkling is renowned for taking classic textbooks and ‘reinventing’ them with a range of interactive features and media.

By their own admission, Harrison’s has been the most ambitious project to date and has taken over a year to complete the transformation to the iPad.

This review will not focus on the content of the book as most people will have experienced Harrison’s at some point during their medical career. Suffice to say Harrison’s Principles of Internal Medicine continues to set the standard as the pinnacle of current medical knowledge and practice, offering the definitive review of disease mechanisms and management.

As such, this review will focus on the overall Inkling platform and features which accompany this iPad version of Harrison’s Principles of Internal Medicine. 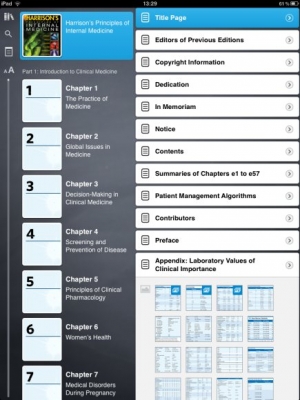 The first important thing to note about the Harrison’s textbook is its size. The paper version weighs in at 2,800 pages and this translates to approximately 2GB of space on your iPad. However all 397 Chapters and 57 eChapters are stored locally on your device removing the need for an internet connection.

Launching the textbook within Inkling brings the user to a familiar user interface. 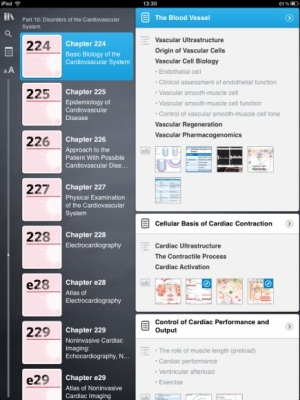 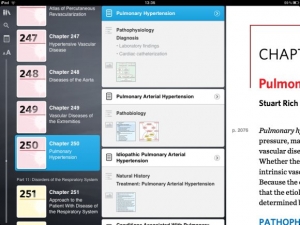 All Inkling titles are designed and built upon the same platform and utilize the same structure as seen in other titles such as Essentials of Clinical Anatomy and Ganong’s Physiology.

Initially, the user is presented with a (very long) list of chapters. Each group of chapters is collected under a ‘Part’ but unfortunately there is no way to expand or hide these parts meaning that you have to scroll through every chapter until you find the one you want. I feel Inkling may have missed a trick here as the closest feature that has this function is the actual contents page (see screenshot) which breaks the book up into its various ‘parts’. This has more to do with the structure of the book which splits each section into chapters but it does mean finding the required chapter can be more challenging than it should be. 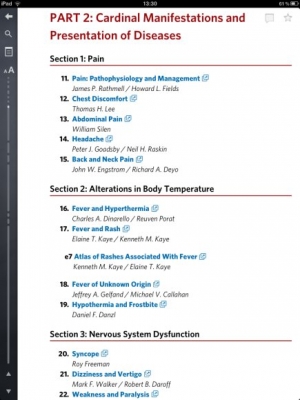 However, once a chapter has been selected, navigation throughout the text is simple and straightforward. The arrows in the bottom left of the toolbar quickly jump between sections. 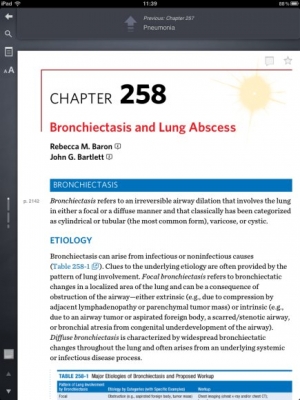 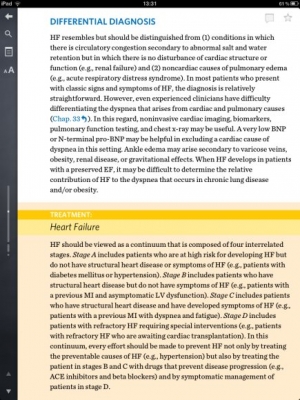 Navigating within a section was sometimes more challenging than desired. While there was some inertial scrolling, I found that this was not always enough to quickly scroll through the sections in each chapter. This was only really apparent on the larger chapters which contained vast amounts of information. In general, though, I did not have any problems interacting with the book. I was pleasantly surprised by the speed at which different sections and images were loaded. 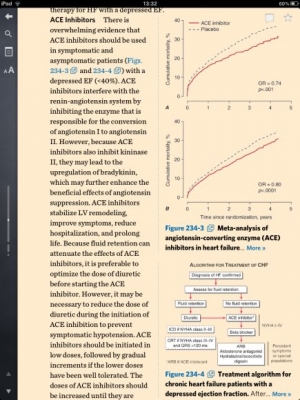 One aspect of this title which the Inkling platform does not cope particularly well with is the sheer size and detail of many sections. Although there are options to change the text size, I felt that sometimes the text was too big (even on the smallest setting) and as a result actually became harder to read.

An example is shown in the screenshot below where one paragraph takes up the entire page which is difficult to read. Page fidelity with the paper version is maintained and marked off at the start of each chapter. 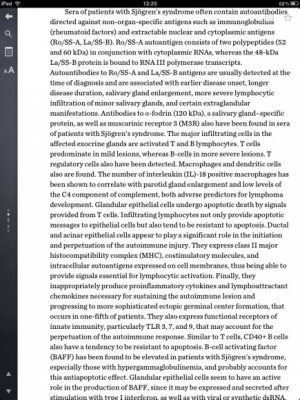 Integrating media into textbooks has always been an Inkling strong point and they do not disappoint with Harrison’s. There is a wealth of images, tables, slideshows, videos and more, all fully integrated and linked to within the text. 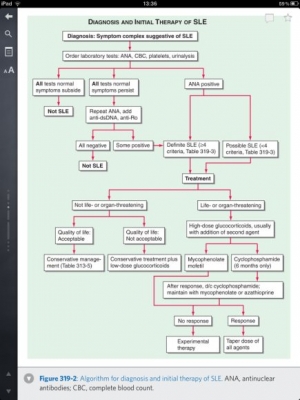 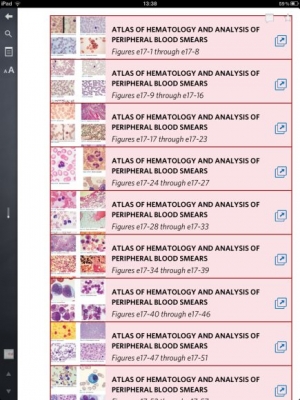 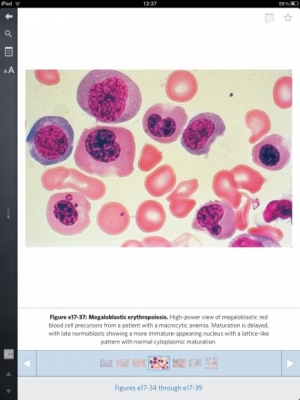 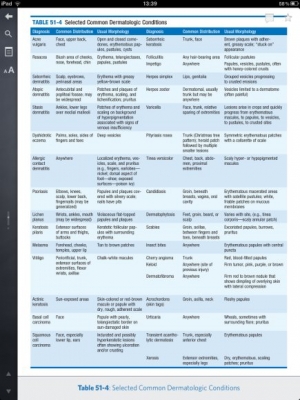 Tapping on a table or image will cause it to slide in on a new page so that you can purely concentrate on the information while a quick flick will cause it to slide away. I found I often used the search function to navigate as it was often quicker and easier than scrolling through numerous detailed chapters. I liked the fact that all information related to treatment and management had been highlighted which made finding this essential information quick and easy. 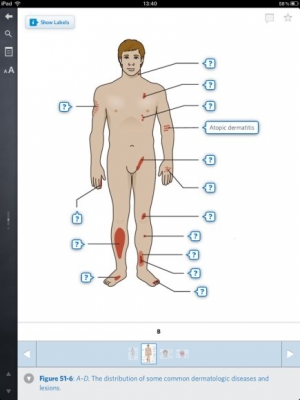 One of the nice things about using the Inkling platform is that thought that has gone into the little details. For example, including an inbuilt dictionary to define words or including the option to search by content type. One feature I hadn’t noticed before was the inclusion of a ‘back’ button when a hyperlink takes you between chapters. 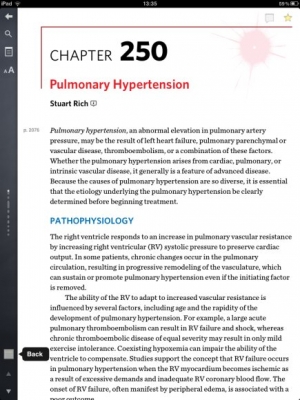 The inbuilt search function is highly effective and useful tools such as bookmarks, highlighting, and basic annotation make customizing the textbook easy. While the annotation tools are not as comprehensive as those seen in PDF management apps, they are generally suitable for most uses. 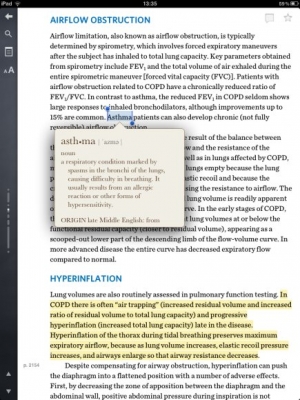 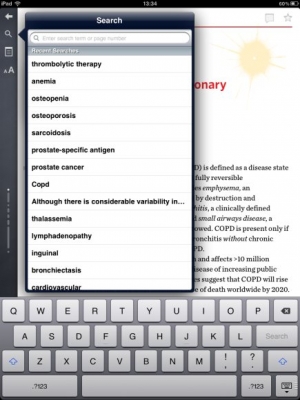 Having used this book for a number of weeks now, I think it is an excellent title and believe that Inkling have done a fantastic job transferring this title to the iPad. The rich text and media go a long way to making Harrison’s more accessible to medical professionals and students alike. Time will tell if the inbuilt social features allowing users to share notes takes off.