There are many different health and wellness companies offering cash incentives to individuals to make healthy decisions, whether it is losing weight or quitting smoking cigarettes.

However, what good is giving someone a cash reward for being healthy when they could spend that cash on anything, including cigarettes, beer and fast food cheeseburgers ? The team from United Preference (@utdpreference),one of the resident startups at Chicago’s Healthbox digital health incubator, plans to use the concept of Tailored Spend to answer this question and advance health care in the process.

United Preference has a vision to become the currency behind the many incentive driven programs launched by health & wellness groups and employer organizations to encourage members and employees to live healthier lifestyles. To do this, the company creates pre-paid debit card products which can be customized to be usable only to purchase particular categories of health-related goods.

As a B2B company, United Preference is looking to partner with large employers and payer groups who already use incentive-based programs. They would offer them branded cards which can be tailored to fit the healthy spending needs of each of their members. The company also has plans to develop a mobile app that uses NFC technology to make payments, or simply become a card in a user’s Google Wallet.

I had the pleasure to visit Healthbox (@health_box) to interview the United Preference team. The company was founded by Mark and Pamela Hall (middle and right in picture below) who are husband and wife as well as long time business partners and is based out of Princeton, NJ. Please see the transcript of our conversation below.

(Editors note: Mark and Pamela, much like many married couples and business partners, tended to start and finish each others sentences, so while all of the dialogue below is attributed to Mark, it was clear there is a team of two behind United Preference) 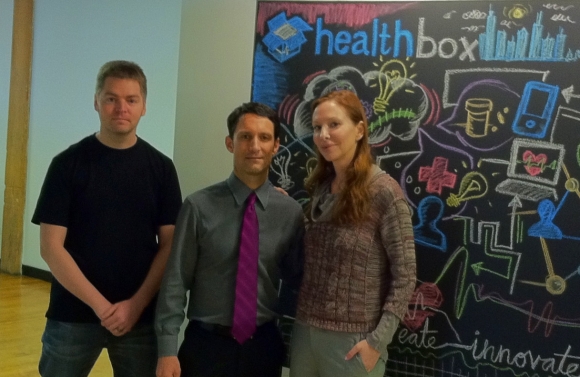 BTE: When did you start United Preference? What is the inspiration behind the business?

Mark Hall: We launched in October of last year, so we have been around for about three months. Our main office is in Princeton, NJ, and now we have Chad Hendry (left in picture above) based out of our Chicago office. The inspiration for United Preference comes out of our background, Pamela and I are also married and business partners. We have launched many technology, media and financial services businesses in the past, I actually launched the first pre-paid credit card with Russell Simmons, and late last year Pamela and I started thinking and talking about tailored spending and how we could tailor specific card products so they could only be used to purchase things like healthy foods or products and services that incentivize healthy behaviors. Out in the marketplace today we see diabetes, obesity, smoking and several other chronic conditions creating a problem that costs $450 billion annually nationwide.

The health plans and employers are spending $60 billion annually to try to incentivize better behaviors because it’s cheaper to pay somebody to be healthy than it is to pay for their bypass surgery in 6-18 months.   One way to incentivize healthy behavior is cash money, and reward-based incentives. The challenge is if you give them cash they can use that on anything from candy bars to cigarettes and booze, which is not necessarily conducive to a healthy outcome. We asked the question, ‘how do you give people cash incentives in a way that you can tailor how they are able to spend that money?’ For instance, maybe they would only be able to spend the money on items that motivate them to achieve specific milestones on the path toward a healthier lifestyle such as weight loss or smoking cessation.

One of the things we came up with is what we call progressive consumer spending, which is simply giving people tailored cash incentives to buy things that they like. We recognize that no two people are the same and no two people are going to be motivated by the same thing. For somebody who is interested in consumer electronics, if we can align them with that particular incentive and deliver that incentive in the form of cash which can be spent on the new iPad that they want, for instance, and we can encourage the behavior of quitting smoking or losing weight. To encourage that with positive incentives you are almost tapping into an emotional realm of having a positive experience while doing something that is likely unpleasant. The reason people don’t stop smoking much of the time is because its an emotionally unpleasant experience. But if you can get your cash rewards, because we know that cash works, and give them something they want and tie it into a more positive experience we hope that at the end the result will be more positive results.

What we have found from conducting focus groups is that people are really motivated by incentives early in the process, but at some point they become emotionally disconnected from that, so we are thinking about ways to change that. We really started this company with the idea of how can we revolutionize health care using tailored spending and how can we get a footprint big enough to truly impact the lives of millions of people. That is the first conversation we had about this and it remains the core of our objectives today.