While effective, engineers at Brown University have designed a new biochip sensor that can check blood sugar levels by measuring glucose concentrations in saliva instead.

The significance of this is that  human saliva is typically about 100 times less concentrated than in blood, so in the past, getting accurate results has been elusive at best.

The technology is made possible by combining nanotechnology, nanoparticles and surface plasmonics. Plasmons are density waves of electrons, created when light hits the surface of a metal under precise circumstances. Plasmonics have various roles ranging from physics to lithography, microscopy to biotechnology.

The engineers at Brown etched thousands of plasmonic interferometers onto a fingernail-size biochip. They then measured the concentration of resulting glucose molecules on the biochip. The results were positive, demonstrating that  glucose levels similar to the levels found in human saliva could be detected.

“This is proof of concept that plasmonic interferometers can be used to detect molecules in low concentrations, using a footprint that is ten times smaller than a human hair,” said Domenico Pacifici, Assistant Professor of Engineering at Brown University.

This proof of concept has been published in Nano Letters, a publication of the American Chemical Society. Further applications for the biochip suggested by the engineers include detecting a wide range of chemicals or substances, including anthrax, and other biological compounds.

“To create the sensor, the researchers carved a slit about 100 nanometers wide and etched two 200 nanometer-wide grooves on either side of the slit. The slit captures incoming photons and confines them. The grooves, meanwhile, scatter the incoming photons, which interact with the free electrons bounding around on the sensor’s metal surface. Those free electron-photon interactions create a surface plasmon polariton, a special wave with a wavelength that is narrower than a photon in free space.”

“These surface plasmon waves move along the sensor’s surface until they encounter the photons in the slit, much like two ocean waves coming from different directions and colliding with each other. This “interference” between the two waves determines maxima and minima in the light intensity transmitted through the slit. The presence of an analyte (the chemical being measured) on the sensor surface generates a change in the relative phase difference between the two surface plasmon waves, which in turns causes a change in light intensity, measured by the researchers in real time.”

Domenico Pacifici explains the next steps, which includes developing further tests for the biochip.

“The proposed approach will enable very high throughput detection of environmentally and biologically relevant analytes in an extremely compact design. We can do it with a sensitivity that rivals modern technologies.” 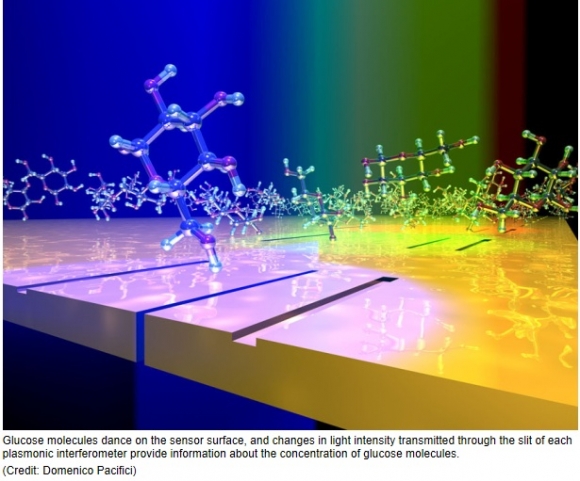 While not specifically discussed in the article, the possibilities of integrating this technology into smartphones is quite plausible. We have reported on an edible microchip that is being deployed in the UK capable of transmitting physiological data to smartphones or computers.

Additionally, we have discussed the concept of a lab on a chip, where South Korean researchers believe that a biosample – sputum, saliva, blood, or even urine – could be applied to the screen of a smartphone for analysis. The possibilities of this technology are bright and we will keep you updated on future developments.