Their entry was entitled “Ensuring Safe Transitions from Hospital to Home” and included its Care Transition Suite for coordinating data management among all participants, including emergency responders (EMS), physicians, and hospitals, during the transition of a patient back and forth between their home and the clinical setting.

The public challenge, which received 40 submissions, called on developers to devise an intuitive application that dealt with the issues and complications often associated with moving a patient into and out of a hospital safely and efficiently.

Data is synced across tablets, desktops and Smartphones using native apps and “push” technology as soon as the data becomes available.

Axial has built strong relationships with some of the biggest names in open source, including Apache, RedHat, and RackSpace, and seems very much committed to opening their platform up to potential partners. 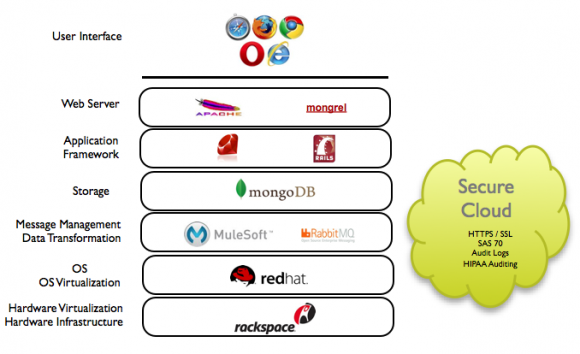 “Two-thirds of patients can neither describe their diagnosis nor state the purpose of their medications,” said Joanne Rohde, CEO of Axial Exchange, in a press release. “Our application not only engages patients, but also ensures that information flows to all caregivers in a way that benefits health systems, payors, and patients.”

Raleigh, NC-based Axial Exchange was in the headlines a couple times during 2011, first when they raised a $1.5 million seed round early last year led by Canaan Partners along with IDEA Fund Partners, and again in August when they were named a finalist in the DCtoVC Startup Showcase hosted by Morgenthaler Ventures.

See CEO Joanne Rohde giving the company’s pitch at the DCtoVC event in the video below.