I had the opportunity at last week’s mHealth Summit, along with iMedicalApps senior editor Felasfa Wodajo, to sit down with Julien Penders, program director of the Human++ program at the Holst Center, a division of imec. The Holst Center houses 2500 engineers, computer scientists, and other developers doing disruptive research in Europe very similar to what is being done at the MIT Media Lab here in the US.

Julien Penders was kind enough to conduct a demo of the recently announced ECG patch technology that utilizes Bluetooth Low Energy in the corner of a bar in the lobby of the Gaylord National hotel for Dr Wodajo and myself.

The ECG patch measures up to 3 lead ECG signals, tissue-contact impedance and includes a 3D-accelerometer for physical activity monitoring. The data are processed and analyzed locally, and relevant events and information are transmitted through Bluetooth Low Energy. The patch is capable of monitoring, processing and communication on a minimal energy budget. When computing and transmitting the heart rate, the entire system consumes a mere 280µA at 2.1V, running continuously for one month on a 200mAh Li-Po battery. When transmitting accelerometer data (at 32Hz) on top of the heart rate, the power consumption remains below 1mA in continuous operation, giving about 1 week of autonomy.

Using BLE adds a standardized plug-and-play communication gateway to mobile devices such as smartphones and tablets enabled with Bluetooth 4.0, most of which will be released in 2012. 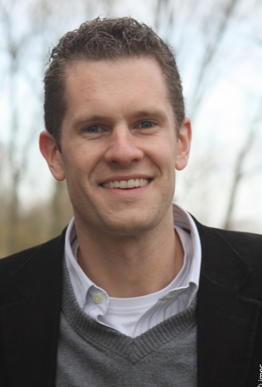 Pender’s lab has also developed several other lab-on-a-chip sensor arrays including an electronic nose which is used to identify complex mixtures through a non-seperative mechanism. It consists of several sensors that are all sensitive to many volatiles, but each in their specific way so that the combination of their responses results in an ‘odor fingerprint’.

Julien Penders is Program Manager at the imec/Holst Centre, where he leads the activities on Body Area Networks. He is responsible for the integration of technology research achievements into prototypes of wireless health monitors, development of embedded algorithms, and deployment of integrated prototypes for use in healthcare, sports and lifestyle. He has (co-) authored over 15 papers in the field of body area networks and autonomous wireless sensor networks, and is the author of one book chapter on the topic.

Imec is headquartered in Leuven, Belgium, and has offices in Belgium, the Netherlands, Taiwan, US, China, India and Japan. Its staff of about 1,900 people includes more than 500 industrial residents and guest researchers. In 2010, imec’s revenue (P&L) was 285 million euro. Through Julien we learned  more about the great work being done on body sensors at imec and look forward to sharing more in the future.