One of the major announcements at last week’s mHealth Summit was made by Qualcomm who introduced a new platform for wirelessly connecting medical devices. The 2net platform abstracts away the details of connecting a sensor to a cloud-based server.

Right now, if a company develops a great  lightweight sensor to measure, say, walking speed, it will also have to engineer a way for that information to be transferred wirelessly, sometimes across a couple of stops, to its eventual destination somewhere on a server. Although these same challenges repeat for every device, each company has to “reinvent the wheel”.

Additionally, once it arrives at the company’s servers that rich collection of data would still be isolated – in a “data silo”. If another company comes along with a terrific heart rate sensor and suggests, “why don’t we combine the two data streams and make a useful new app”, not only would they have to recreate the entire chain of communication for themselves, the two companies would have to agree to methods for their two servers to talk and share information.

2Net makes almost all of the above problems go away. It opens up a world of seamlessly connected wireless devices that allows application developers and sensor designers to concentrate on their work and “outsource” all the communication and data storage needs. Already within the Qualcomm pavilion on the exhibit floor, there were already several companies taking advantage of the new “2net” platform.

This is a big deal.

Actually, Qualcomm made three concurrent announcements. First, they are spinning off their Qualcomm Wireless Health division formally into a wholly owned subsidiary, Qualcomm Life. Also announced was the creation of a $100M venture fund for connected wireless companies called the Qualcomm Life Fund. The fund will invest in the following areas:

The fund has already announced five investments; AliveCor, Air Strip Technologies, Cambridge Temperature Concepts, Telcare and WorkSmart Labs, four of which were present at the Summit.

The exciting announcement, however, is the 2net platform. The goal of the platform is to make it simple for medical devices of all kinds, whether they measure oxygen saturation, weight, blood pressure, etc., to get their data to where it belongs. We had the opportunity to learn about 2net with Chris Talbot, Senior Director, Business Development for Qualcomm Life. We will soon publish our interview with Rick Valencia, VP and General Manager and Qualcomm Life about its history, business goals and possible partners. 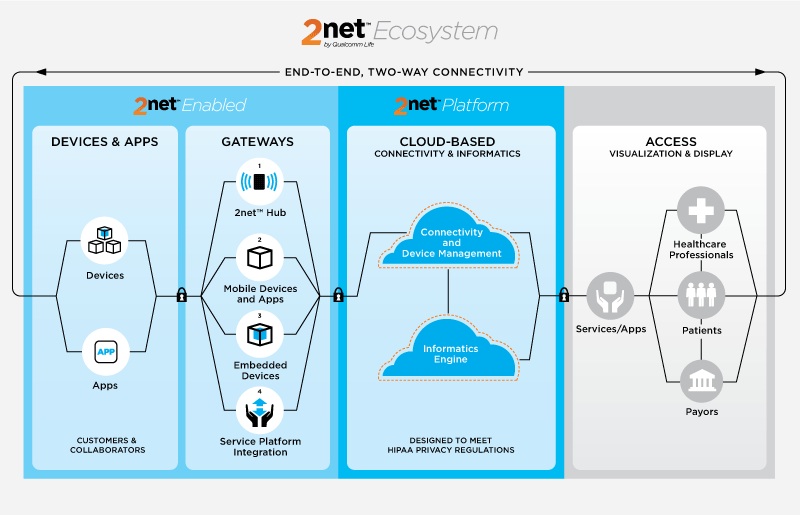 There are four ways that data can be transmitted using the 2net system. 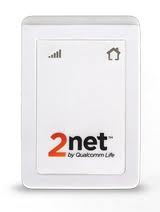 The 2net hub is a device which has prongs for a wall outlet, two LED lights … and that’s it. Built into it are four radios, 2g/3g cellular, WiFi, Bluetooth and Ant+ (a low power radio protocol used mostly for exercise equipment). It can communicate with any 2net aware device in the house, using any of the above radios, and transmit the data via cellular communication to the 2net platform.

Although many people do not realize this, Qualcomm is one of the largest MVNOs in the world (mobile virtual network operator). This means that it buys cellular bandwidth from the likes of AT&T and Verizon and resells or uses it on behalf of its customers, which is how the 2net hub communicates to the 2net servers. The result is that the maker of, for example, a home sphygmanometer can build into the device any kind of radio – bluetooth, WiFi, etc. and it  has to do is make it able to communicate with the 2net hub.

After that, Qualcomm Life will make sure it arrives at their server. The consumer does not have to worry about setting up a WiFi network, pairing Bluetooth, etc. It is plug-and-forget. This also accelerates advances in the device marketplace because consumers will find it easier to swap one device for another.

The 2net hub, by design, is a fixed point device. For mobile devices, there are two other methods to connect to the 2net platform. One is via a cell phone acting as a gateway. In this case, Qualcomm Life provides a set of code to be added to a health or medical app that directs sensor data to the 2net servers using the cellular network. Another method is embedded cellular chips inside devices which themselves connect to the cellular network. This is analogous to an Amazon Kindle which has an imbedded cellular chip for downloading books but (of course) does not make phone calls.

Finally, any server on the internet can feed information directly into the 2net servers using application programming interfaces (APIs). This would be useful in the case of, say, a patient health record (PHR) uploading data to 2net for the purposes of displaying it on a mobile app somewhere else. In fact, it is this bidirectional ability of the cloud based service that will allow for a wealth of yet to be imagined data mashups valuable for populations and individuals.  This is the most exciting part of this new platform.

It is this potential to aggregate all kinds of biometric and user entered data that is making possible the Macaw app which is an impressive demonstration of how a mobile device can aggregate a wide swath of biometric data and guide an individual into reducing risk of preventible illness. It is a powerful and comprehensive tool based on the Prevention Plan to decrease your health risks–which we will profile in an accompanying article.

The APIs that allow streamlined data sharing to and from other servers was also via an integration into a web based EHR, Hello Health by Myca. As can be seen below, there is a live dashboard  aggregating input from several different sensors simultaneously, including blood pressure, asthma inhaler puffs, glucose, weight, etc. 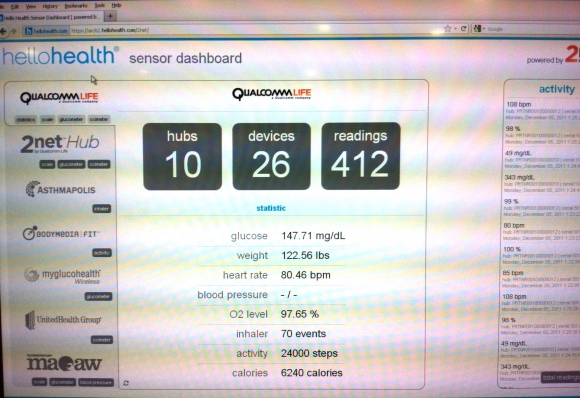 The volume of biometric data is expected to massively increase in the near future. Currently, data transmission is a patchwork of independently created proprietary solutions. Just imagine the number of  communication subsystems within any single hospital connecting medical devices. Qualcomm is stepping into this disordered marketplace, taking advantage of its global scale and multiple decades of leadership in wireless communication to offer a unifying platform.

Although the system is not based on open protocols managed by a standards body, such as the W3C for the internet, a simple and reliable system that companies large and small could subscribe to could well be the catalyst to launch the next big phase of the mHealth revolution.