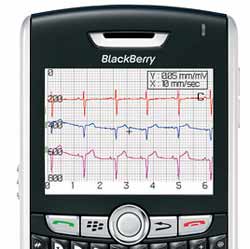 Maestros Mediline Systems Limited, an Indian medical device maker, launched a telemedicine platform using their portable ECG device, E-UNO R-10 (not the catchiest we’ve ever heard) nearly a year ago. In partnership with Vodafone, this device would transmit ECG’s over Vodafone’s network to a cardiologists mobile phone, initially with Blackberry support only. The cardiologist could then reply with a diagnosis and recommendation for the on-site provider.

Currently, the ECG device called E-UNO R-10 is being used in rural areas around Mumbai, though they are currently looking to expand into central India as well. E-UNO R-10 can also be used for mass screening as well as remote consultation of specific patients. The device is also being marketed for use in urban areas to transmit ECG’s from an ambulance to a receiving hospital.

CEO Murali Mohan explains the benefits of the device.

“…the equipment needs a GPRS-enabled phone and uses a two-directional interface system in smart phones. The ECG recording equipment has 12 ‘leads’ like usual devices and works like a touch screen mobile. By pressing a single button, an attending doctor can send the data to a consultant and receive treatment details and observations. The machine also has a memory card and can store data of at least 20 patients at a given time. A tiny bluetooth enabled printer is also attached for a hard copy.”

The E-UNO R-10 device is also able to automatically log ECG recordings permanently in a centralized database, which has other potential applications as India moves to implement it Aadhar system that will assign unique identifiers to its billion plus citizens.

The imedicalapps team has previously reported on various portable ECG devices, such as CardioDefender by Everist Genomics as well as the AliveECG from AliveCor. The E-UNO R-10 is yet another product that offers an affordable method of capturing ECG data.