In mid-August, the death of the venerated WebOS platform along with HP’s Touchpad tablets was announced, marking the end of the platform that, in some ways, started it all.

Apparently, a researcher at Stanford didn’t hear the news though, because he’s modified a Touchpad to manage a technique that Time Magazine recently featured as one of its 50 best inventions of the year.

The thing about treating patients in the MRI suite is that there literally can’t be any metal in the room. So Mr. Holbrook took a Touchpad, stripped out of all the metal, designed some impressive WebOS based apps, and is now using his modified tablet to monitor data from multiple sources and direct treatment right next to the running MR scanner.

For those who do not know, HP’s beleaguered Touchpad, and along with it WebOS, has had an interesting year. Following an announcement that HP was doing away with the platform, a fire sale of sorts ensued with prices as low as $99 for the entry level model. This jump in demand caused HP to reconsider and they are now reportedly reevaluating their plan to discontinue their tablet line.

Recently, HP announced that it will be allowing WebOS to go open source as well, where an eager crowd of developers and WebOS-diehards certainly eagerly await it.

Mr. Holbrook, in a profile on the HP website, answered the most obvious question – why a Touchpad,

From a hardware and software perspective, I started with webOS devices for a few reasons. First, I perceived the TouchPad to be easily modifiable, given its mainly plastic frame, absence of glue, and non-reliance on magnets (ie for charging). Second, the webOS interface seemed the most advanced. The card browsing for example, allows for very easy and intuitive control of the various systems of an interventional procedure.

The magnetic field generated from an MRI machine is similar, on a smaller scale, to what occurs when an electromagnetic pulse (EMP) goes off.  This magnetic field can erase hard drives, cause voltage spikes and generally cause havoc to any electronic device, all on top of the mayhem of metal flying around the room.

The folks at HP added,

“The TouchPad, a device primarily constructed of plastics and minimal glues was an excellent choice to start with. Dr. Holbrook made some warranty-voiding adjustments to his TouchPad, removing metallic components such as the vibration motor and speakers.”” 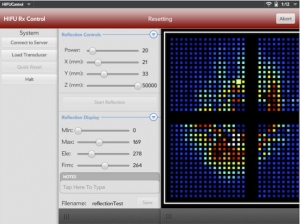 In the above picture, Holbrook built an app to control an InSightec ExAblate Conformal Bone Systen HIFU transducer to run an ultrasound test commonly run in the scan room. He also created an app that can display data on the respiratory rate of the patient as well as an app that interfaces with the MRI control platform, all of which can be monitored simultaneously with other displays using the unique multitasking capabilities of the HP Touchpad and WebOS.

In short, he can now practically manage the entire process from his tablet. 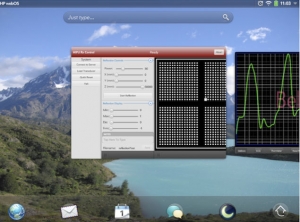 While this is work that has likely been ongoing since long before HP’s August announcement, we can’t help but feel that WebOS may have found life after death.