HealthTap, the interactive doctor-patient health education network, announced at last week’s mHealth Summit that it has secured $11.5M in Series A funding led by Mayfield Fund, Mohr Davidow Ventures, and Eric Schmidt’s Innovation Endeavors. The company will use the funds to accelerate growth, recruit top talent, and engage more physicians and patients in the vibrant online HealthTap community.

HealthTap’s network is built to allow patients to ask health questions online via a mobile app and quickly receive credible answers from top US physicians across 100 specialties, for free. HealthTap was launched just two months ago, but has quickly grown with more than 6,000 leading physicians and 500 top healthcare institutions currently participating.

“We are excited to partner with a serial entrepreneur such as Ron Gutman whose passion, track record, and team will help realize HealthTap’s grand vision,” said Mayfield Managing Director, Tim Chang

HealthTap embodies the powerful consumer internet trend of moving high-value mainstream offline experiences, such as doctor-patient interactions, to the online world. The company leverages the three key innovation drivers that I am most excited about: mobile apps that enable new kinds of rich, personalized interactions via smartphone and tablet; gamification that enhances user engagement and retention; and social mechanics, such as expert-based Q&A and reputation graphs, that facilitates deep interest and trust. It’s this kind of fresh thinking that will accelerate the ‘consumerization’ of healthcare, and re-invigorate an extremely important and valuable industry that has been behind the IT curve and mired in inefficiency for decades.

The company has physician members in all 50 states, all of whom undergo a thorough background check verifying their medical licenses and good standing. Approved physicians receive a free “Virtual Practice” from which they can guide a conversation and help create new, useful content for patients. Physicians can answer questions posted by patients, endorse answers written by other physicians, and help people find the best information, while creating connections for in-person care. 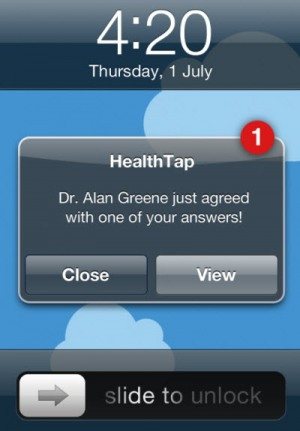 “HealthTap has become the only place online where medical information is trusted both by physicians and by patients alike,” said Ron Gutman, HealthTap’s Founder and CEO. “Doctors interact with one another and rate each other every day based on the quality of their shared medical knowledge and its helpfulness to patients. This revolutionary approach, which we call ‘Trust Sourcing’, makes it easy for members of the community to find the most reliable health information and the best doctors in town.”

The company was founded in 2010 and launched their mobile app a few months ago with an initial focus on pregnant mothers and pediatricians, more recently expanding into other physician specialties and patient verticals. Cleveland Clinic and Mount Sinai Hospital are among the 500 healthcare groups who have already signed up for the network, but the network of physicians is not exclusive to large organizations and includes individual physician practices.

“Patients and doctors alike have long been frustrated by the one-size-fits-all approach to healthcare the limited opportunities for finding personally relevant health information online,” said Rowan Chapman, Partner at Mohr Davidow Ventures. “Ron and his team are successfully addressing the critical need for a source of trusted medical information that allows consumers to interact with doctors online in an efficient and meaningful way. The rapid growth of the HealthTap community coupled with this round of funding is further evidence of the tremendous opportunity at the intersection of web-enabled social networks and more personalized, data-driven healthcare.”

My initial impression is that the company is certainly taking a unique approach to online doctor-patient interaction and that the service could become potentially quite useful for patients. But it is very unclear what the real long-term benefits of participating will be for the physicians. Having now signed up and played with the site a little bit I can’t help but get the feeling that the substantial amount of funding HealthTap was able to raise is due largely to their Facebook-esque design and the prevailing mindset among Silicon Valley VC today that great returns are to be found at the intersection of social media, mobile apps and gaming. This is embodied in what investor Tim Chang of Mayfield Fund highlighted the reasoning for his firm’s involvement in the deal (from above):

Venture capitalists need to be careful in health care and realize that just because a new company looks and sounds like Facebook, it doesn’t mean its going to surge to an irrational valuation like Facebook.

iMedicalApps senior editor Felasfa Wodajo, MD, had an opportunity to catch up with Ron Gutman at the mHealth Summit and get his take on the value proposition for physician contributors which will be featured in a separate post next week.