The list of keynote speakers is an all-star list of influential leaders in health and wireless medicine.

After an introduction by Robert Kaplan, PhD from the NIH and Scott Campbell, PhD from the FNIH, Patricia Mecheal, PhD, executive director of the mHealth Alliance highlighted the progress mobile health is allowing less developed countries to tackle their health problems such as malaria and other communicable diseases.

Patricia Mecheal also mentioned how mobile technologies have helped gender inequalities, explaining that she herself is now a patron of mobile apps for expectant mothers.

The two keynote speakers on the first day were Kathleen Sebelius, secretary of the US Health & Human Services and Eric Topol, MD.

Both speakers had clear messages for the attendees but it was Dr. Topol who really gave a rousing and inspirational keynote that touched on nearly every aspect of the digital revolution in medicine.

[Ed. Note: check out our recent interviews with Patty Mechael and Eric Topol. The following is excerpted from their speeches.]

Virtually every American now has a cell phone with smarthphones comprising nearly half of these phones. We are used to using smartphones to get directions or choose where to eat but now we are increasingly using them to track and manage our health. The iTunes app store has 12,000 apps for health. But as technology goes, this is not big news. What is exciting is that this is happening where the rate of innovation has been slower, namely medicine.

While technology has improved the consumer experience almost everywhere, such as banks and ATMs, healthcare has stubbornly held on to “cabinets and hanging files”. Whereas we have some of the best doctors, nurses and technology in the world, and the highest spending, Americans still live with illness and die younger than in many countries. At the same time, doctors and nurses are frustrated by the demands of care. Healthcare costs have stressed families and have led to difficult choices at all levels of government.

Part of the problem is lack of information. Patients cannot access their information, which is stored in offices. They cannot find information on medications or find specialists. Doctors way too often have inadequate information on their patients, about their diabetes management, or what happened recently while they were in the emergency department.

This is why the president launched early in his term an effort to improve health IT in this country. Since 2009, the share of office electronic health records has gone from 17% to 34%, with 52% saying they plan on adopting them. We are on pace to triple the use of EHRs. This is a huge change. Mobile health is the natural extension of this change. We need to bring these advances to pockets and purses. Mobile health allows us to reach populations previously hard to reach such as African Americans, Latinos and others.

People are happy to leave some portion of their healthcare  in the hands of professionals. They are happy to leave scalpels and lasers in the hands of surgeons. However, we should be involved in diet, quitting smoking, choosing a doctor. It has been incredibly inspiring to see developers come up with tools to do this such as iTriage, which is helping consumers find health care facilities as easily as finding a restaurant as well as Pillbox, which is helping people identify pills. This is not just impacting patients. For physicians, a smartphone with Epocrates is almost as necessary as a stethoscope.

Yet, I believe we have a long way to go. We in administration ask what can do to accelerate the development of this technology. Now, we believe the biggest force for innovation is America’s entrepreneurs. Government has a role too, as  it can drive research to develop the context for this technology. It can be a catalyst. The rapid adoption of EHRs is an example. The benefits of EHRs have been well known, yet adoption was very low in 2009, even in a sector that is 17% of GDP. We helped remove obstacles.

First, we developed a national platform with interoperable systems. We built regional Health Information Exchanges (HIEs) for institutions that did not have access to IT expertise. We then put in financial incentives for doctors and hospitals. What was especially important was developing meaningful use standards that, for the first time in this country, can track the outcomes of interventions. Along the way, we created 50,000 new jobs in this field.

When government targets it resources effectively, we can make major changes. We are making vast amounts of data available to those of you in this room. Until recently it was hidden, scattered across websites and publications. We unlocked the data and built a central clearinghouse at www.healthdata.gov. There has been an incredible response, with dozens of apps built and we are just getting started. Much of this is due to the incredible ingenuity of Todd Parks, serial entrepreneur within HHS.

Earlier this year we challenged developers to develop apps for young people to avoid dating violence. One out of five women in college report some sort of assault. If young people can create a flash mob, why not use the technology to protect themselves?  Today I want to congratulate two winners of our “Apps against Abuse” challenge: Circle of 6 and OnWatch. We are also working on Text4Babies, which has helped 250,000 moms.

Today, I ask all of you to help move all health technologies forward–not just mobile. These technologies will be embraced by consumers if they feel that their information is safe. At the FDA, we are practicing safe regulation, so that mobile software keeps health information secure. We need your help in both of these areas. We are talking about using the biggest technology breakthroughs of our time and applying it to our biggest challenges. As China and India grow their middle class, they will also need these technologies for their consumers. There is no reason we cannot be the ones to provide those technologies. The future is in sight. 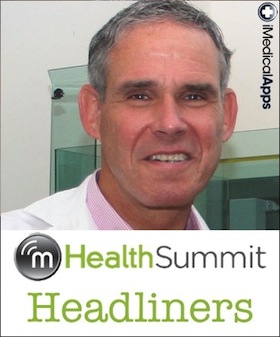 It is wonderful to be here, representing the West Wireless Health Institute, whose mission is to lower the cost of health care.

[shows slide of 16th century fresco] This image demonstrates the word “Kairos”, the greek word for “supreme moment”. We are at this most momentous time in medicine due to this inflection point because of the intersection of the digital & the medical world, which is sort of a cocoon. These two worlds are now merging.

There is a tremendous digital infrastructure already built [shows slide of iPod, Blackberry, iPhone, Kindle and iPad]. This affects shopping, thinking and behaviors. There is a new species “homo distractus” [shows cartoon of twins in utero texting to each other]. We have gone from zero to 800m users on Facebook since 2004, soon it will be more than a billion, and from 0 to 250m Tweets per day on Twitter in a few years. Occupy Wall Street is a street movement propelled by social networks. Why can’t there be a similar movement for health?

A patient recently posted her picture on Facebook. Somebody far away made the rare diagnosis of Kawasaki disease using just the photo. In online patient communities like PatientsLikeMe, many patients are gleaning more support and information from their peers than their doctors. We have trillions of gigabytes of data, we have supercomputers like Watson that can process 200m pages per second. Wellpoint has even contracted with Watson for challenging diagnoses.

Joseph Schumpeter, an Austrian economist from last century, coined the term “Creative Destruction”. This is the Kairos. We see it in newspapers and magazines. Johns Hopkins is closing Welch Medical Library since all their content is going digital. When I was training there, I lived in that building.

We are also seeing the beginning of wireless sensors. These include the Nike running sensor and the Jawbone UP. The Zeo sensor tracks sleep continuously, you can see I woke up many times last night as I was excited about today. The Withings weight scale can send data directly to providers, same with the Agamatrix glucometer. There is even now available continuous glucose monitoring every five minutes using a sophisticated skin patch.

The AliveCor device allows ECG measurement simply using by utilizing a case on the outside of an iPhone. [He demonstrates his own ECG live on stage by holding the phone in his hands] I used one of these recently during a plane flight to diagnose someone with a heart attack. [He places the credit card sized sensor against his chest]

You can see my heart rate is faster than it was before – look a PVC!  This will engender a culture of “e-hypochondriacs” [laughter].

You can also use Skin Scan to take a picture of a mole and get a text back saying whether it is good or bad. The Cell Scope can make a medical microscope out of a cell phone for under $50. Using microfluidics and nanoelectronics, you can now sample saliva for genetics. This is what has been termed “the incredible shrinking laboratory”.

Eyenetra.com sells a $2 app that makes it possible to diagnose near- and far-sightedness, it was invented by MIT. The Sensimed Triggerfish can monitor continuous interocular pressure. Tears can be tested to measure glucose. Today, a big announcement from Qualcomm will allow data aggregation using a cloud-based service.

The future is global non-communicable diseases– not Tb, HIV & malaria. The future is cardiovascular and cancer worldwide, which have mHealth strategies. In Isaacson’s biography of Steve Jobs, he says he is excited for his son Reed since “the biggest innovations in the 21st century will be the intersection of biology and technology”. We will soon have the complete $1000 genome in 2 hours is the future. Nicholas Volker, a child born in Milwaukee, Wisconsin was about to die due to multiple infections and sepsis. Finally, one of his doctors suggested they sequence his genome, and found the genetic source of his problem. He is now cured and healthy at age six.

DNA Electronics makes a handheld device that analyzes a portion of genome using saliva. It can tell what dose of plavix should be used or if an alternative is preferable. It can help avoid the rare and devastating side effect of Steven-Johnson syndrome which can be seen with Tegretol (carbamezapine) whose susceptibility is due to a known allele. We now have breakthrough drugs for cystic fibrosis for the 3-4% of patients with a particular gene. We also know that some fraction of the 347 million diabetics in the world are resistant to metformin.

[shows stethoscope] This is a stethoscope. It was invented in 1847. I have not used one in two years. I have a miniature ultrasound in my pocket that allows me to see the heart, why just listen to lub-dub when I can see the hear? [he demonstrates by showing his own echocardiogram live on stage]

Why do we know when something will go wrong in our cars but not in ourselves? We can’t tell if an artery is going to crack, we only can see plaques. Yet arteries that crack often only have partial blockages. This is why Tim Russert had a normal stress test just weeks before he died suddenly of a ruptured left anterior descending coronary artery. How can we tell ahead of time?

Now we can by looking at molecular expression of endothelial cells. This can be detected with a nanosensor the size of a grain of sand, connected to an app. We will be able to detect cancer cells and immune the destruction of islet cells for diabetes. Embedded nanosensors are a big part of the future. This is the superconvergence of genomics, imaging, internet, social netowrking and wireless sensors.

It is the biggest convergence of our lives.