Reflection on the importance of anatomy for medical students in the UK, and what the future might hold

Historically, anatomy has always been a cornerstone in medical education. Until recently, dissection and didactic lectures have predominated.

The publication of the General Medical Council’s guidelines for UK medical schools, set out in the document Tomorrow’s Doctor’s, recommends that undue emphasis on detail is not required and calls for a reduction in the burden of factual information in the medical curriculum.

Since then, many medical schools in the UK have changed their course structures and one noticeable change has been a decline in the use of cadaveric dissection. Whether this is due to legislation issues brought about with the introduction of the Human Tissue Act or by the shortage in donated cadavers, this trend certainly raises a number of important questions around how best to train the future physician.

Cadaveric dissection is widely valued by professional anatomists as the most suitable method to fulfill learning objectives when teaching anatomy, whether they are of a traditional or more modern viewpoint. The best method to teach anatomy continues to be widely discussed, but the importance and significance of cadaveric dissection remains overwhelmingly valuable.

As Friedrich Tiedemann once said,

“Doctors without anatomy are like moles. They work in the dark and the work of their hands are mounds.”

In some reports, the knowledge base of junior physicians in applied clinical anatomy has been reported as being below what many would consider to be safe. This coupled with an increase in litigation claims due to “anatomical ignorance,” should raise concerns.

So how can we teach anatomy? There are a number of available modilities including dissection, prosection, computer-assisted learning, radiologic imaging, procedural/clincal anatomy, and didactic lectures. Most medical schools opt for a multi-modal approach to teaching anatomy, but many neglect the necessity of clinical anatomy.

Technology has advanced significantly and its impact in medicine and anatomy are widely known. Many consultant radiologists have been forced to relearn their anatomy, as more advanced tools that detect anatomy were simply was not viewable when they were trained.

I believe that advancement in technology has the potential to unite traditional and modern approaches to teaching and learning anatomy. We have seen a boom in anatomy learning tools in the last decade, ranging from tablet apps to online resources such as Anatomy.Tv from Primal. This growth is not expected to slow. So if dissection is in decline, despite the support of its use by both medical students and expert anatomists, what teaching modality will medical schools of the future be delivering?

Virtual autopsy, admittedly in its infancy, has the potential to modernize and unify anatomical teaching, as well as its other applications in forensics and pathology. By combining data sets from CT and MRI scans of the body, it is possible to produce a full volumetric description of a human body, not just a 3D model.

One such company, Norrköping Visualization Centre, in collaboration with the Center for Medical Image Science and Visualization (CMIV), have developed the Virtual Autopsy Table shown below. 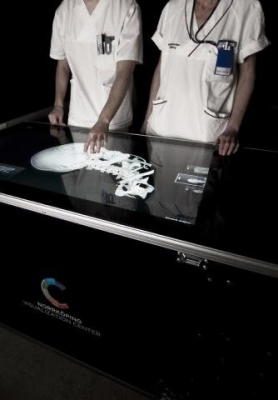 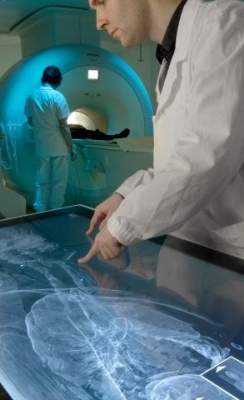 As you can see, the technology is visually stunning and allows multiple users to interact collaboratively and simultaneously to gain a deeper understanding and insight into the anatomy of the human body. With this technology in medical schools, an expert anatomist would be able to teach small groups dissecting on the fly, using virtual blades to dissect the specimen and view them in different anatomical planes. This allows for rapid display of key anatomy that could only be replicated (poorly) by multiple prosections.

Manipulating these data sets in full high-def 3D would allow students to obtain a proper appreciation of the human body, the kind of apperciation that previously could only be gained through dissection but devoid of the associated problems that are responsible for a decline in use of dissection in the UK.

With further development and the increased use of tablets among medical students, this learning experience could then potentially be personalized, as university’s could make the software and learning resources available to their students to use in their own time.

In conclusion, virtual autopsies are at the cutting edge of medical research and education and I for one look forward to seeing this modality of teaching take off in the future.