Pretest Psychiatry app review, not the best choice for board prep

The Pretest series has long been a popular resource for medical students, especially third-years studying for clerkship boards and the USMLE Step 2 CK.

Many of the Pretest books have now gone digital; I had the chance to review the Pretest Psychiatry app during my psychiatry clerkship.

The app costs $29.99 and is based on its corresponding text. It is published by Modality Inc., the same publishers of the previously reviewed First Aid for the USMLE Step 1 app. Thus, their interfaces are almost identical. The app is compatible with iPhone, iPod touch, and iPad.

From the opening screen, users can create a new quiz, view saved quizzes, go to the question browser, or view their cumulative stats. 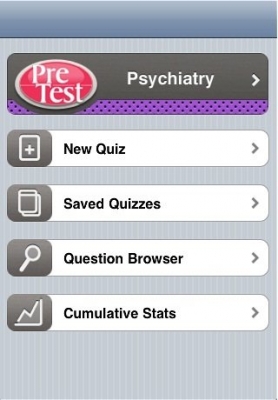 In question browser mode, users can go to a list of all questions, view questions by section, view bookmarked questions, or select reference mode, which will automatically display correct answers.

There are 13 different question sections, including:

It is important to note that correct and incorrect answers are not saved in question browser mode.

To track your performance on questions, you will need to create a quiz. Quiz questions can be drawn from any or all of the 13 aforementioned question sections, and each quiz can contain up to 50 questions.

Quizzes are timed at a rate of an average of one minute per question. Cumulative statistics from completed quizzes can be accessed later from the app’s home screen. 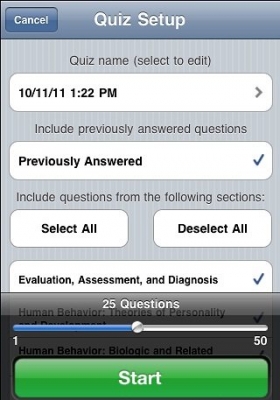 Unfortunately, Pretest Psychiatry falls short of being a helpful resource for the National Board of Medical Examiners psychiatry shelf exam. From my experience with the shelf exam, the Pretest questions were too short and simple and did not accurately represent the difficulty of the actual test.

Also, the Pretest app has many questions more pertinent to a psychology grad student than a medical student, including questions about founders of theories and names of developmental stages. For instance, one set of six questions in the section titled, Human Behavior: Theories of Personality and Development, asks you to match a statement with its corresponding psychoanalyst. 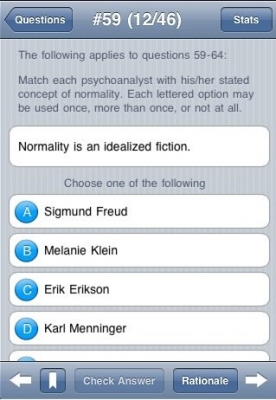 Meanwhile, the NBME focuses more on diagnosis and management of disorders than psychological theory.

In my opinion, questions in this Pretest app were much simpler than those on the actual exam. Furthermore, I found a few instances of inaccurate or conflicting information in this app. For example, body dysmorphic disorder was described in one answer explanation to be more common in adolescent women, and in another explanation was said to occur most often between ages 20-40, with an equal distribution among men and women. 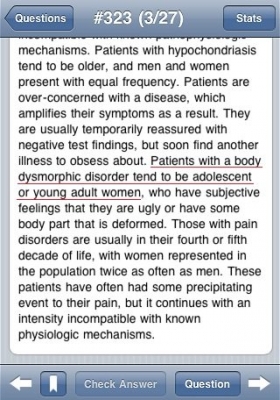 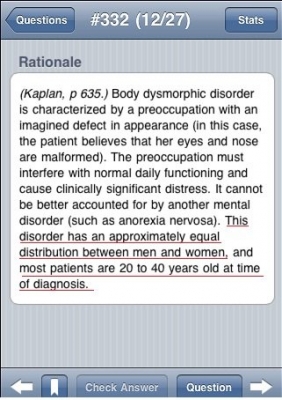 In addition, answer explanations were often inadequate and did not explain why each answer choice was right or wrong, even in some cases where more than one choice seemed plausible.

The Pretest Psychiatry app would not be my first choice to prepare for the NBME psychiatry shelf exam. Though I did learn some useful nuggets of information from it, and it helped to reinforce some of the concepts I already knew, in retrospect I found the psychological theory questions a huge waste of time and the questions overall unrepresentative of the type of questions on the actual NBME.