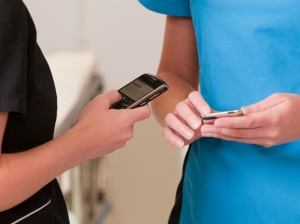 Its no secret that the smartphone is becoming as much of a staple of the physician’s toolkit as, say, the stethoscope. Several studies and surveys have sought to quantify this trend among practicing physicians.

Recently, a group of researchers released the results of a survey of smartphone utilization among residents in ACGME (Accreditation Council for Graduate Medical Education) and the results provide interesting insights into what the future may hold.

We have previously looked at reports on the rate of adoption of smartphones for nurses and practicing physicians. While there is a fair amount of variability, such as between physicians of different specialties, this survey demonstrates that we can expect even higher rates of adoption in the future.

Approximately 8,353 surveys were sent out electronically to residency and fellowship program directors for further distribution among their faculty, fellows, and housestaff. Just over 3,000 responses were submitted. It’s worth noting though that the response rate could not be assessed because there is no way to know how many individuals actually received the survey in the end.

While 85% of respondents reported owning a smartphone, only 56% reported using it in clinical practice. One interesting feature however is breaking this down by training level. Nearly 70% of residents (N = 1,397) reported using their smartphone clinically, while only 39.2% of attendings in practice for more than 15 years (N = 665) reported the same. This is despite only marginally different smartphone ownership rates – 88% among residents and 78% among the attendings. In short, this confirms the intuitive prediction that younger physicians are using smartphones (and likely other mobile technology) at higher rates and are likely to carry this forward as they become practicing physicians.

Another interesting finding was the difference between specialties. Only 52% of surgeons reported using their smartphone clinically, despite an ownership rate of 98% – by far the lowest utilization rate among the specialties queried. Perhaps this is reflective of a deficit of resources targeted at surgeons, particularly those in training. However, it is somewhat surprising that usage of relatively universal resources is presumably then lower among surgeons as well – 75% of all respondents reported using Epocrates, a rate that is doubtlessly far lower among surgeons.

Finally, the survey also assessed what kind of apps respondents wanted. Leading the list were textbook/reference apps, exam review apps, classification/treatment algorithm apps, and general medical knowledge apps. Interestingly, these are mostly categories in which a wide range of apps are already available. One possibility is that this is reflective of the difficulty an individual physician has navigating the app store, where the useful apps that they want are drowned out by the noise of the thousands of other apps available.

To read the full Pubmed article from the source click here.