During my psychiatry rotation, I met quite a few patients who suffered from panic attacks. For some, panic attacks come on rarely. But for others, panic attacks are frequent, debilitating occurrences that significantly diminished their quality of life.

In the most severe cases, people confine themselves in their homes in fear of having an attack in public.

People who suffer from panic attacks describe symptoms such as chest pain, rapid heartbeat, difficulty breathing, and feelings of impending doom. Often the fear accompanying these sensations can intensify the attack in a vicious cycle.

The Panic Attack Aid app, published in the UK and priced at $4.99, attempts to calm the person and help them cope during the duration of the attack. This app is compatible with iPhone, iPad, and iPod touch and was made with the help of actual panic attack sufferers; however, the creators are not medical or mental health professionals.

There are three main components to the app: breathing, reassurance, and distraction.

Panic Attack Aid opens to the image of a slowly expanding green circle on the background of a serene blue sky with a few fluffy clouds. The circle repeatedly enlarges, turns yellow, shrinks, turns green, and enlarges again. The top of the screen instructs the user, “Try to breathe in and out in time with the circle. Say relax with every outbreath.”

Several different messages of encouragement appear in turn below the circle, such as:

This helps the user relax, the mesmerizing circle guides their breath, and the messages provide reassurance. This mode is calming and can help curb the feelings of intense anxiety and fear of impending death or harm. 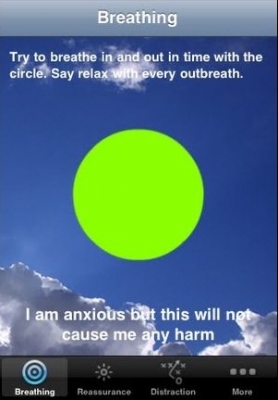 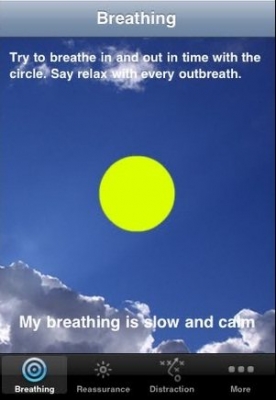 The next tab, reassurance, provides comforting words to the user in paragraph form. The user can select a symptom or symptoms that are most disturbing, or choose their current location, such as an airport or a shop.

This is important because many people experience panic attacks in public places and may feel helpless or embarrassed. 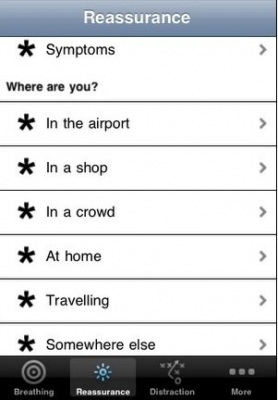 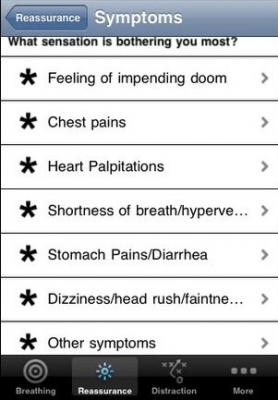 After the user makes a selection, a long paragraph appears that reads as if a person is talking to the user, encouraging them and reassuring them of their safety. Each paragraph is specific to the selection, of course, but all of them end with “Remember, you are fine.”

The user is also redirected to one of the other two modes: breathing or distraction (discussed later). 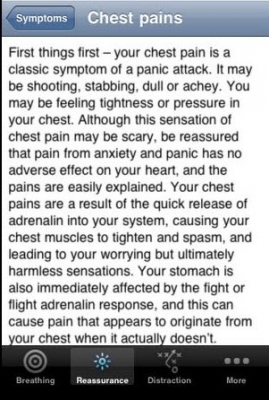 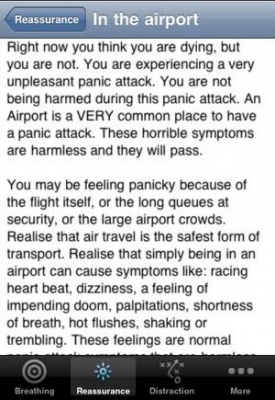 Unlike the breathing and distraction modes, the reassurance mode offers no calming imagery of blue skies, simply black and white text.

This section seems like it would be effective as long as the user could concentrate enough to read the paragraph. If so, reading the reassurances would provide a great distraction from the panic attack sensations as well as comfort to the user.

Distraction mode forces the user to use their mind and think of something other than the frightening sensations. The user is instructed to perform tasks such as:

The user can easily switch distractions by swiping left or right. Like the circle in breathing mode, the distractions are displayed on a backdrop of a blue sky. There are a total of twenty different distractions. 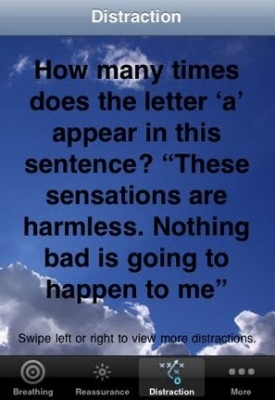 Panic Attack Aid seems to be a helpful app for sufferers of panic attacks. People having a panic attack in public or at home can sit down with their iPhones and access coping methods quickly. The interface is intuitive and user-friendly, which is important during a time of intense anxiety.

The app encourages the user to consciously relax and allow for the symptoms of panic to pass. It has received several positive reviews on the iTunes App Store from sufferers of panic attacks.