Diabetes currently affects 25 million children and adults across the US. In 2007, diabetes was listed as a contributing factor in over 230,000 deaths and generated $174 billion in total costs.

iglucose eliminates the burden of keeping logbooks and empowers individuals with diabetes to be more engaged in the self-management of their condition. The smartphone-sized device connects to market leading data-capable glucometers and wirelessly communicates blood sugar readings to a cloud-based database.

“…it is helpful for their healthcare professional to understand the blood glucose level trends that occur on a daily basis. Today, for most patients, the only way to do that is to keep manual logs of glucose levels and take those records to their doctor. Unfortunately, because the process is so time-consuming, few people actually do it.”

Blood glucose readings are automatically communicated wirelessly to the secure iglucose database utilizing an embedded AirPrime GSM module supplied by strategic partner Sierra Wireless. The iglucose device falls under the “emerging device” category, a term used by the AT&T ForHealth team to describe a new generation of connected consumer medical devices which come with embedded cellular technology rather than pairing with a smartphone, an example being the Zephyr BioHarness.

Benefits for individual diabetes patients include the ease of use, automated reporting, compatibility with market leading glucometers, and HIPAA compliant data security. Additionally, users’ family members can have the peace of mind of total access to real-time glucometer data.

PositiveID Corporation, which trades publicly on the Nasdaq under the symbol PSID, saw its shares surge nearly 50 percent with nearly 2.9 million shares traded intraday (daily average of 163K) following news of FDA 510k approval to market its device in the US.

The iglucose is the first core product in a suite of diabetes management technologies the company has in the research and development pipeline. Other potentially disruptive innovations coming out of PositiveID include Easy Check, a non-invasive breath glucose detection device which measures the level of acetone in a patient’s exhaled breath and correlates that acetone level to a measure of blood glucose. This would totally eliminate the need for patients to repeatedly prick their fingers to draw blood, a daily reality suffered by millions of diabetic Americans today. 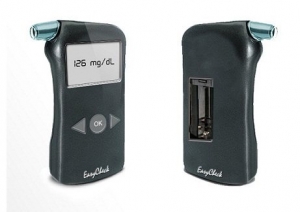