While electronic medical records have many benefits, they are often limited by the fact that different EMR’s do not communicate with each other. Even with the consolidation of healthcare in many areas within a few large systems, if a patient goes between an Epic-system and an Allscripts-system, they are still out of luck. That, however, is set to change thanks in part to provisions in HITECH and promotion of health information exchanges.

In the Cincinnati area, two hospitals that are testing this new functionality are The Christ Hospital and Mercy Health Anderson Hospital. They are using Healthbridge as their Health Information Exchange (HIE) to facilitate this process.

The aim is to facilitate access to and retrieval of clinical data to provide safe, efficient and effective patient care while decreasing healthcare spending. This data is securely accessible in real-time for physicians across multiple connected hospitals, in this case The Christ Hospital and Mercy Health.

Healthbridge is one of the largest nonprofit supporters of health information technology and HIE adoption, supported by a coalition of hospitals in the Cinicinnati area.

Trudi Matthews, spokeswoman for HealthBridge, explained why Cincinnati is primed for the implementation of a HIE.

That was step one of the process.  Now that the Greater Cincinnati area uses electronic medical records, the next step was facilitate the HIE,

“Now all hospitals in town use electronic medical records, but communicate frequently with providers that aren’t. The secure direct email is a way for nonelectronic providers to get information in a quick, timely, easier-to-use way that’s better to use than a fax. Following step two in the process, hospitals will be able to transmit patient records back and forth to each other and to other health care providers, such as primary care doctors, nursing homes and home health agencies.” 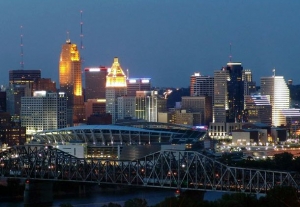 In addition to communication between providers on different EMR’s, this HIE also seeks to bring our paper-based colleagues into the fold as well. As pointed out in the article, it doesn’t yet necessarily make sense financially for some providers to move to an EMR (though HITECH changed that calculus for many). Systems that encourage seameless communication between providers across the care continuum will be important, particularly in the short-term, to provide safe, cost-effective care.