When autistic children get stressed they often don’t show it. Instead, their tension might build until they have a meltdown, which can result in aggression toward others and even self-injury. Since autistic children have a difficult time expressing or even understanding their emotions, teachers and caregivers can have a difficult time anticipating and preventing meltdowns.

These types of social communication and emotion regulation difficulties lie at the core of Autism Spectrum Disorders (ASD), making interpersonal interactions overwhelming, frustrating and stressful for children and their families.

In order to study ASD researchers rely objective measurements of emotional states. Affectiva (@affectiva) was spun-out of the Affective Computing Group at the MIT Media Lab in 2009 by professor Rosalind W. Picard, Sc.D. (@rosalindpicard) and research scientist Rana el Kaliouby, Ph.D. and has since gone on to deploy its body sensor network technology in numerous settings to detect and record physiological signs of stress and excitement by measuring slight electrical changes in the skin, known as electro-dermal activity (EDA).

The key to this light and wearable sensor is its ability to compensate for motion and temperature. Read more to learn how the technology works.

The company’s core technology is the Q Sensor, a wearable biometric sensor in use at 150 leading universities and corporations which tracks user excitement, engagement, stress and anxiety. The Q Sensor is offered on the company’s website in two distinctive models, the Q Sensor Curve and the Q Sensor Pod. Beta versions of the Q Sensor device cost $2,000.

The curve-shaped Q Sensor is designed to wear on the wrist, so it is comfortable and unobtrusive to wear all day at work, play, or sleep. This makes it ideal for long-term measurement in clinical and therapeutic research. 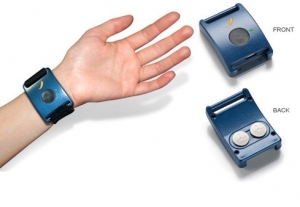 The pod-shaped Q Sensor can be worn in several different ways, but the company provides custom bands for wearing the pod in the palm of the hand or on the wrist. 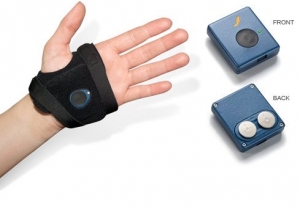 The Q Sensor can be worn as a wristband or a smaller module that can slip beneath a sweatband or a baseball cap to make it more discrete. The actual sensor is approximately four by four centimeters, can be wiped down, and the wristband itself can go in the washer.

The device also has a temperature sensor to help correct for mistakes, for instance the device can tell when a user simply enters a hot room rather than having an emotional reaction. 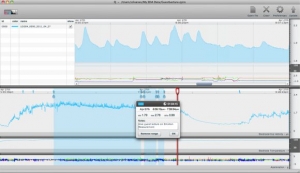 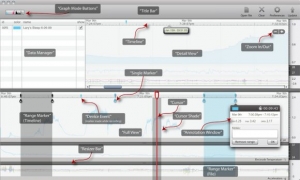 One example of a research team using the Q Sensor to study autism is at the University of Notre Dame, where they are currently measuring how children diagnosed with autism respond to interactions with a humanoid robot during therapy. The challenge is to measure children’s responses to the robots and improvements in their comfort levels over time.

The team began using the Q Sensor in October 2010 to see how the device readings compared with data captured using a tethered system developed by BIOPAC Systems which is often used in physiological research for measuring EDA. According to lead researcher Dr. Charles Crowell, the comparisons are “very similar” and “we’re happy to use the Q Sensors for the project.”

Affectiva’s other major product Affdex is software that interprets facial impressions to scientifically measure emotional responses in real-time using a standard webcam. Large companies and market research firms like Millward Brown use Affdex to deliver intuitive emotion insights for advertisements. Other long-term applications for this technology envisioned by the Affectiva team include interactive kiosks, emotion-enabled devices and gaming.

In July, Affectiva completed a $5.7M Series B financing round led by WPP’s London-based consumer insight group, Kantar, and Ohio-based Myrian Capital. The company announced in a press release they would be using the funds to speed up market deployment of the Affdex software product. The company had previously raised $2M in funding from its founders and Lingfield AB, and also won a $650,000 grant from the National Science Foundation.

The company recently leased space in Santa Clara, CA, which will serve as headquarters for Affectiva CEO Dave Berman, as well as newly-hired VP of Product Management Avril England, VP of Sales Brent Sapiro, and VP of Consumer Success Andy Dreisch. The company is actively hiring in its Waltham, MA office and its new Santa Clara office.

“If you’d like to join top scientists and engineers to tackle the next frontier of computing — emotion – please give us a call.”