Real-time monitoring of your health while driving in your Ford

The average American, according to data from the US Census Bureau, takes 60 minutes to commute to work and back. This large chunk of time that people spend in their vehicles represents a new type of sustainable business opportunity that is just now being commercially tapped into.

Because of this, Ford Motor Company is currently developing new technology that has the potential to impact your health from the comfort of your own vehicle.

K. Venkatesh Prasad, the Senior Technical Leader in vehicle design and infotronics at Ford Research & Innovation, is overseeing the development of voice-activated apps and wireless services that would enable motorists to monitor their own health as well as various chronic illnesses while on the road.

This technology should debut in the near future.

“During a panel discussion earlier this week at the Wireless Health 2011 Academic and Research Conference in San Diego, Prasad said development of in-car health and wellness technology is part of a broader effort to expand the capabilities of Ford’s SYNC in-car connectivity system. “We were saying if all we did was connect the mobile phone to an online digital music player that it wouldn’t be enough.”

Ford SYNC technology is something that has been used to promote and sell their vehicles and has been displayed in various commercials. It is a factory-installed, voice activated in-vehicle communications and entertainment system.  It currently allows motorists to make hands-free telephone calls and to control music and various other functions using basic voice commands.

The system consists of applications and user interfaces developed by Ford and third-party developers that run on the Microsoft Windows Embedded Automotive operating system. 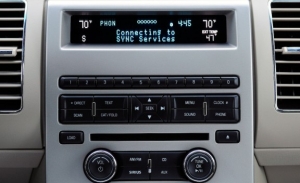 Ford’s first foray into this new frontier is with a wireless glucose monitoring system.

“Ford has been working with Fridley, MN-based Medtronic to develop a prototype wireless health system capable of connecting to a continuous glucose monitoring device Medtronic makes for people with diabetes. Ford’s SYNC system uses Bluetooth to connect with the monitoring device, which would share its monitoring data with the SYNC system, which could then query the driver (or a passenger) and offer advice if blood glucose levels are too low or too high.”

Ford also has been actively seeking software developers throughout Europe and the United States in an effort to expand the capabilities of the SYNC technology platform even more. Ford’s online SYNC Mobile Application Network has drawn numerous submissions, increasing the likelihood that cars will eventually become something akin to a smartphone on wheels.

“As this health IT platform becomes more capable, it can empower motorists in new ways, said Anand Iyer, the president of WellDoc, a Baltimore, MD-based startup that has FDA clearance for a mobile technology that helps people manage their chronic diseases. Iyer and Prasad have been working over the past six months to integrate WellDoc’s cloud-based health information system with Ford’s SYNC system to provide individualized advice for those with asthma or diabetes. Using voice commands, SYNC users can access and update their WellDoc profile to receive real-time patient coaching, behavioral education, and other help, on their medical history and current diagnosis.” 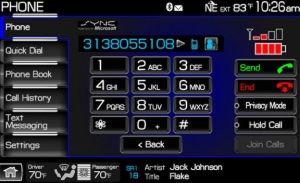 The value of the SYNC technology platform, though, will take time to be fully realized.  Awareness of this platform’s potential will increase as SYNC becomes an aggregator of information from a variety of sources.

“The value starts to increase because it now adds context,” Iyer said. In this respect, Iyer says the vehicle’s technology platform provides substantial advantages over a smartphone that might be equipped with similar technology for continuously monitoring blood glucose levels.”

Further integration is expected in the future, with an emphasis on monitoring vitals in real-time.

“Ford is developing a similar prototype that could gather online data about pollen levels and other allergens, combine it with GPS-based contextual information, and offer advice to motorists with allergies, asthma, colds, and other sensitivities.”