Developed by Sling Shot Scientific, PreRound Translator is a handy app for quick interview questions with patients whose primary language is not English.

It is currently available for iOS devices running version 3.1 or newer through the iTunes store.

PreRound Translator offers over 30 different languages, including commonly spoken ones such as Spanish, Mandarin, Arabic, Korean, French, etc.,(along with others not as frequently encountered in clinics across the United States such as Swahili, Ndebele, Teke-Eboo, Bulgarian and so on). 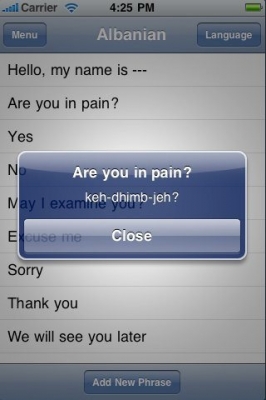 Morning pre-rounds often consist of relatively straightforward, and sometimes brief, questions for patients. Encountering patients that require a translator can considerably slow down the pace of this process. The developers of PreRound Translator recognized the importance of these type of questions and created this app with such preround interview situations in mind. PreRound Translator will assist medical students, physicians, nurses, and others involved in patient care with patient communication, especially in the absence of a translator.

To use the PreRound Translator app, users are presented with a simple, yet intuitive interface. At the bottom of the screen, users may tap the “Languages” button to select from the different languages available. Then, tapping the “Phrases” button at the bottom left allows the user to select from a variety of different questions or statements to be used as needed. Tapping a specific term opens a pop up box with an English pronunciation of the phrase in question.

The downside to this is that the selection of phrases and terms offered for each language differs, which may lead to some frustration with frequent users of this app. 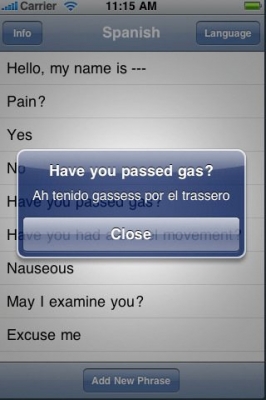 It is probably a good idea to sound out these phrases mentally before trying them out, or the user may risk some awkward misunderstanding with the patient. Taking some time to become familiar with PreRound Translator before using it on the wards will certainly be to the user’s benefit. Those wishing to use PreRound Translator in clinical settings will want to be able to quickly access phrases and state them with some proficiency.

Thankfully, the layout of PreRound Translator is very simple, and yet still appealing. Another plus is that the loading times within this app are at a minimum, boosting user efficiency. In the latest edition of PreRound Translator, 2.0, the developers have included a feature allowing users to add in their own translations. This is very helpful for users who may have just learned an important phrase during patient interviews.

Sling Shot Scientific has also mentioned a possible update that will allow voice-spoken phrases to be included, something that will be very helpful when pronunciations are not well known by the app user. 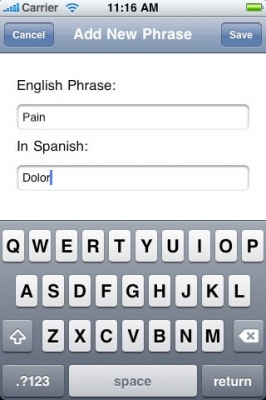 An important thing to note about PreRound Translator is its price, at only $1.99 through iTunes. It is certainly a reasonable price for a fairly useful app, especially when one factors in the potential time saved during pre-rounding and other clinical activities.